Giulia D'Amico, OLPC Vice President of Business Development, unboxes and talks about the all-new XO-4 Touch One Laptop Per Child laptop, featuring the new Marvell Armada PXA2128 dual-core 1.2Ghz 40nm processor, Marvell 8787 WiFi chip and the Neonode IR Touch touchscreen technology. The OLPC XO-4 Touch now also features a HDMI output. Currently still running Fedora Linux based Sugar OS, the OLPC is thinking to port Sugar to Android to use on all OLPC Laptop/Tablet devices during 2013. Thus far, OLPC has shipped over 2.8 Million Laptops to children in schools worldwide. Australia is going to be the first country to deploy over 55 thousand OLPC XO-4 Touch laptop/tablets in the months to come.

Neonode announced today a licencing agreement with the One Laptop Per Child project, turning a new version of the OLPC XO 1.75 Marvell Armada 600 ARM Powered Laptop into a tablet. Keeping the exact same form factor, keeping the exact same readability, keeping the same screen bezel form factor but adding in there the cheap Neonode IR based touch-screen technology. One Laptop Per Child thus far have shipped over 2.5 million Pixel Qi Laptops to Children in about 50 mostly developing countries worldwide. OLPC is still the biggest deployment of Pixel Qi screens worldwide, until someone as Google, Amazon or Apple comes in and gets it mass manufactured for commercial Tablet use. To keep the best possible readability, the least possible reflections in sunlight, using Neonode's IR touch screen technology may be the best idea for the future of Tablets and Smartphones instead of capacitive.

SANTA CLARA, Calif. – July 26, 2012 – Neonode Inc., (NASDAQ:NEON), the MultiSensing touch technology company, announced today a licensing agreement with One Laptop Per Child (OLPC), a non-profit organization that designs, manufactures, and distributes laptops to children worldwide, to embed Neonode’s MultiSensing™ touch technology into the next generation of OLPC’s XO-1.75 laptop, called the XO Touch. The innovative OLPC XO Touch 1.75 is a 7.5” combined laptop and tablet that has a Dual-Mode (sunlight-readable) TFT LCD display which rotates 180 degrees and folds flat over the keyboard for tablet/e-book or game mode.

Embedding the Neonode MultiSensing touch solution will allow OLPC to build a completely new type of rugged laptop-tablet that is extremely fast, cost efficient and energy saving, offering 100% visibility in bright sunlight. This is done without compromising the quality of the first-rate user experience, in full color, and with the highest resolution possible, i.e., 300 dpi. The Neonode MultiSensing technology consists of a state-of-the-art interactive touch user interface that includes gestures, multi-touch, and sweeps at an extraordinary scanning speed of 1000 Hz. Thanks to the energy efficient engineering, consuming just 2W, the XO Touch can be powered through alternative power generators like solar cells or even hand cranks. In addition, Neonode’s green engineering feature AlwaysON™, enables full gesture activated wake-up of the XO Touch when it is in sleep or off mode.

OLPC, created by faculty members from the MIT Media Lab, sells the laptops in large quantities to governments and private institutions around the world, that in turn issue them to children or schools on a basis of one laptop per child.

“We are honored to be collaborating with OLPC to produce the XO Touch, a truly pioneering and sustainable device that shows the broad versatility of our technology. This market entry confirms that our MultiSensing technology makes it possible to create a top class product that is both affordable and extremely energy saving and still has a user interface that is radical enough to satisfy the uncompromising demands of knowledge and entertainment thirsty children” says Thomas Eriksson, CEO Neonode. “Our company philosophy is to contribute to a better and happier world, and we have the opportunity to do so by supporting OLPC’s mission”

“OLPC is proud to partner with an organization that shares its appreciation for innovative and transformative technology. Neonode’s expertise in engineering and design will turn the XO Touch, which combines the best features of laptop and tablet, into a next-level innovative machine.” said Rodrigo Arboleda Halaby Chairman and Chief Executive Officer at OLPC

See how awesome Neonode's touch-screen technology looks outdoors in sunlight on a Pixel Qi tablet in this video I filmed in May 2011:

Pixel Qi has a bunch of customers doing tablets and laptops for Military and Industrial use such as the Orchard Inc Toughblet and the InHand Hydra T3 but they are not yet able to announce big orders from some of the major consumer oriented tablet makers. I'm hoping for the Google Nexus Tablet or the next Kindle to use Pixel Qi, but for any eventual announcements on that we'll have to wait further.

Pixel Qi is finalizing the deals with partners about sizes and quantities to produce their next generation ultra high pixel density Pixel Qi screens, with a new very low power mode that runs at a full 100X power reduction from the peak power consumed by the iPad3 screen. Pixel Qi claims to have a new architecture that matches the resolution of the ipad3 screen, and its full image quality including matching or exceeding contrast, color saturation, the viewing angle and so forth with massive power savings. Here is Pixel Qi's power consumption versus the iPad2 and iPad3:

My opinion and suggestion for Google:
I'd like to see Google invest heavily in Pixel Qi for a 7" 1024x600 screen to be mass produced for the rumored upcoming Nexus Tablet, providing it 20 hours battery life on an ultra slim form factor, with a very small bezel if they can make it have a plastics based screen, suitable for reading Google Books, suitable for outdoor use. Google should invest the money needed in bringing Pixel Qi to the mass consumer market. And then also Google can help bring the 2048x1536 9.7" Pixel Qi screen to the mass Android tablet market.

The success of the iPhone and iPad is due to ARM Technology, but also to the investments Apple has made in using new screen technologies, Apple basically financed exclusivity for the 3.5" capacitive screen when launching the iPhone and they bought an exclusive on the 9.7" IPS screen for the iPad. Now also Apple invested the $2+ Billion getting an exclusive on the 9.7" Retina screen. Google should do the same, not only invest heavily to optimize Android on all the ARM Processors, Google should also invest the money needed in new screen technologies such as Pixel Qi LCD and use that for their "Google Hardware" Nexus devices but then also instantly allow access to the new screen technologies to every other Android hardware maker.

InHand releases their new Hydra-T3 ruggedized 7" Pixel Qi tablet. It runs on the Texas Instruments DaVinci DM3730 1GHz ARM Cortex-A8 and 800MHz TMS320C64X+™ DSP, up to 1GB DDR2, up to 16GB eMMc Flash, the Pixel Qi LCD screen is the 7" 1024x600 built using a chemically strengthened resistive touch screen layer (I wonder how readable this resistive Pixel Qi implementation is). Having been tested through the military specs MIL-SPEC, MIL-STD-810G, MIL-STD-461F it can support extreme temperature, fluid contaminates, solar radiation, fungus, immersion, shock and vibration. It uses a 37WHr redundant 3.7V Lithium Polymer battery for up to 10 hours of battery life. It can run Android 2.3, Ubuntu 10.10 and Windows Embedded Compact 6. 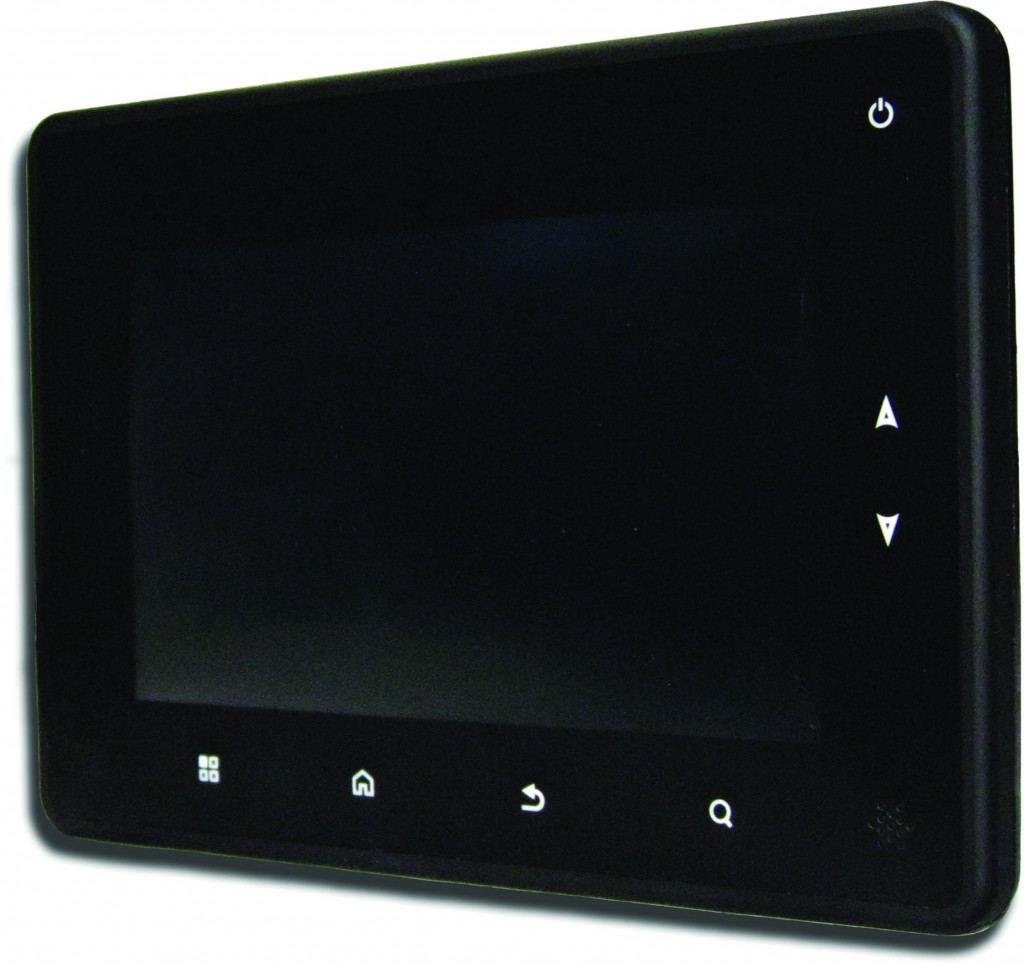 This tablet seems to compete with the Orchard Inc Toughlet which is also a ruggedized 7" Pixel Qi tablet for military and industrial use. The military and the industry must be very eager to use the Pixel Qi screen for tablets outdoor readability, low power consumption as soon as possible.

At the new Google X event project, http://www.wesolveforx.com/, Pixel Qi CEO and founder Mary Lou Jepsen presents the idea of recording images from the human brains memory. With a bit of investment in the right technologies to record higher resolution signals from human brains, it can soon be possible to record images from human memory. As far as I understand the presentation, you can soon wear some special glasses that have small sensors on your retina, or some sensors on your head, then just think of some images and those can get recorded with high detail and precision. Seeing an image and thinking about that image is the same thing, our brains record every image that we see for ever with great detail and it is soon be possible to read from our brains visual memory.

The 1280x800 10.1" Pixel Qi screen is ready, here it is demonstrated under a bright spotlight simulating the sun as well as in some prototypes of upcoming Android tablets. Founder, CEO and inventor Mary Lou Jepsen talks about the latest news from Pixel Qi, where they are going, what they are up to.