So the AT&T iPhone exclusivity is finished. This allows AT&T to broaden its range of Android devices to be promoted and sold, including such awesomeness as the Motorola Atrix 4G coming up.

Analysts have calculated AT&T's price per iPhone to have been as high as $600 per user, while Verizon is paying less than $400 per new customer that they sign up with an Android phone.

At estimated Bill of Material for manufacturing a high-end smart phone like the latest Androids and iPhone to be as low as $150 per phone and at the highest $200 for the phones with the more expensive components such as dual-core processors, more RAM, larger high quality LCDs, Super AMOLED or new 4G/LTE antennas.

With the end of AT&T's exclusivity, there is no guarantee Apple will be able to make as much as $600 per iPhone any longer, as both AT&T and Verizon would then much prefer promoting the use of Android which thanks to competition, they can get for cheaper. This could mean Apple might have to lower cost per iPhone towards the $400 to carriers, thus loosing about half of its profit margins per iPhone, and the iPhone is estimated to make up more than half of Apple's yearly revenues and profits.

Now there is information that AT&T is starting a trade-in exchange service on customers old phones: 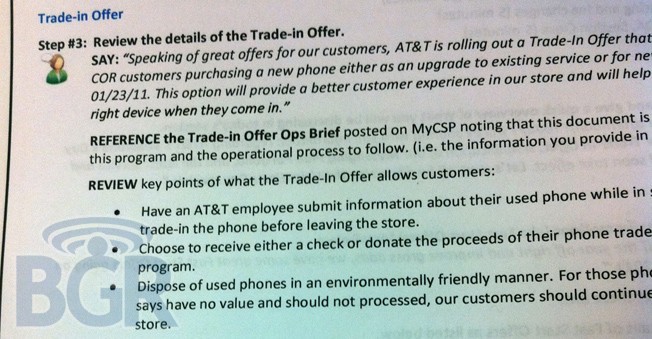 This could mean old iPhone customers on AT&T could get further rebates on upgrading to new Android phones by bringing in their old iPhones.

For example, if Motorola Atrix 4G is $199 on a 2-year contract with AT&T, for a previous iPhone customer, if they bring in their old iPhone they could get the Motorola Atrix 4G for free. And AT&T may still offer some kind of recycling of old iPhones by turning them into low cost refurbished devices for pre-paid use.

After the end of the exclusivity, it is likely that AT&T will sell more Android phones than Verizion will sell iPhones.

What Google should do. Now.
Nokia needs Android