At about 3x lower power consumption, much lower heat dissipation and much lower overall system pricing, the Freescale i.MX515 platform in a development board developed by Pegatron, is used for benchmarks of all kinds of performance areas by processor benchmarking expert Van Smith at this 9-page benchmarking article at brightsideofnews.com 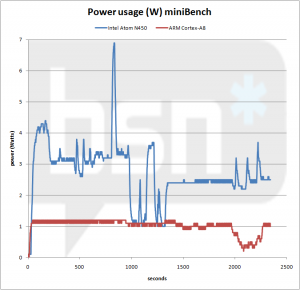 While this specific ARM Cortex A8 implementation performs great on integers, power consumption, heat dissipation, price, floating-point performance still needs some improvement with ARM Cortex designs to come. Consider also that Ubuntu 9.04 used in this test is only the first implementation of Ubuntu for ARM Cortex and that Ubuntu 10.4 which is imminently going to be released will significantly improve ARM performance of those benchmarks.

The ARM Cortex-A8 sample that we tested in the form of the Freescale i.MX515 lived in an ecosystem that was not competitive with the x86 rivals in this comparison. The video subsystem is very limited. Memory support is a very slow 32-bit, DDR2-200MHz.

I guess it's not yet possible for Van Smith in this test to make an apples to apples comparison as the current ARM Cortex A8 are still oriented at Smart Phones and thin and light Tablets rather than full SmartBooks for full desktop-like performance requirements of the more desktop-performance oriented next generation ARM Cortex designs.

The goal for ARM when reaching the markets of Laptop and Desktop form factors is to reach the level of performance required to run full high resolution Web Browsers at full speed, where the OS with the browser boots instantly, with fast enough RAM where unlimited tabs open instantly, where hardware acceleration of embedded videos functions smoothly and where even the Native Client and 3D features run fully within the ARM Powered Web Browser. Once that level of performance is reached, further performance improvements will be less important than lowering the power consumption and lowering the cost of the next processors. Once everything most users need to have processed on their devices seem to run instantly, reaching the instant browser performance level, why would anyone want to increase the performance of client device oriented processors further?

You can find the benchmarks at: brightsideofnews.com