Data Robotics have just announced the release of the new faster gigabit-connected Drobo FS NAS storage device. Check my video interview with Drobo at CES 2010 where I asked them about Ethernet NAS features: http://armdevices.net/2010/01/08/drobo-at-ces-2010/ 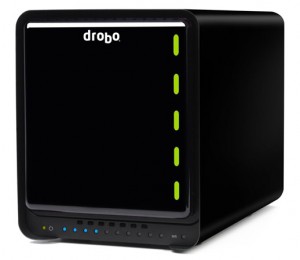 It supports up to 5 SATA hard drives, hot-swappable, 1 or 2 drives can fail in their special RAID configuration and all files stay intact, different sized hard drives are supported automatically (when you buy new larger drives, just replace the oldest smallest ones with those). Now also with some Gigabit ethernet local and remote file sharing features.

I am eager to find out how this new Drobo FS NAS performs as it's said to have a new faster processor. Reaching super fast data transfer, data copy, data backup performance using the newest fastest ARM Processors, keeping very low power consumption especially when the hard drives are idle (which they would in most cases), and especially providing all this at lower prices. I do believe that the Home Server NAS market is potentially going to grow very rapidly. Even though Cloud Computing is revolutionizing storage, 2TB, 1.5TB and 1TB Hard Drives are getting cheaper every day, it makes perfect sense to store a huge amount of data at home as a buffer and cache to the cloud hosted in people's homes. Also, cloud storage at places like Google and Amazon still costs about 16 times more per terrabyte per year compared to buying TB hard drives on the open market and hosting it oneself using a clever ARM Powered NAS in the home (not including cost of NAS and power consumption). As consumers create and download more and more video, audio and high resolution photo files, I believe we all need solutions to manage all those cheap hard drives at home.