JVC is now releasing their new JVC GY-HMQ10 professional camcorder below $9000 on the Japanese market (750,000 Yen). It's using the JVC Falconbrid processor as in my JVC GC-PX10 camcorder that I've been using to film all of my CeBIT 2012 videos (using [email protected]@12mbitps for faster uploads), all of my OLPC Summit videos (most include direct-download links to the original [email protected]@36mbitps camcorder files), all my LeWeb 2011 videos were also filmed using the JVC GC-PX10.

The JVC Falconbrid is one of the new upcoming 4K2K Quad-HD camcorder processors to bring more and more affordable 4K cameras to the market!

The JVC GY-HMQ10 I think is designed for professionals, but I also think it's possible that sooner rather than later, JVC might decide to provide 4K recording support in the sub-$1000 camcorders also in something like a successor to the JVC GC-PX10, perhaps the sub-$1000 JVC GC-PX20 will support 4K!

It takes space for 4 SDXC card slots, I wonder if it's possible to provide a slot for 2.5" SSD drive or perhaps even a SATA hard drive, but then the 4K camera has to become bigger in size than the JVC GC-PX10. 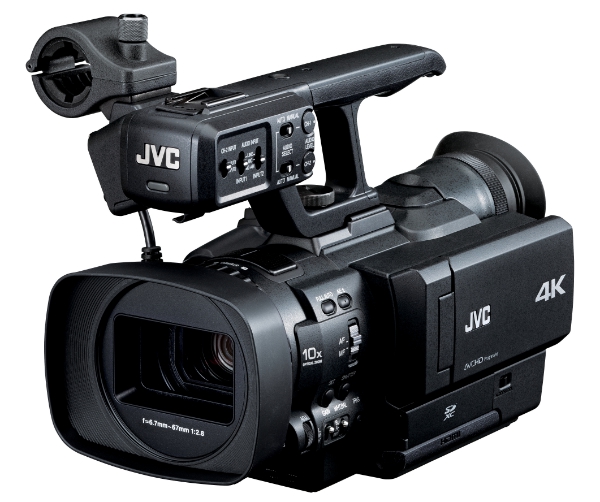 This sounds like it might be cheaper than the Red Scarlet camera (that seems to need to cost at least $15000 to be able to shoot 4K).