Being able to borrow this setup for the past 2 months, among many other that I've been able to meet and demonstrate it to, this allowed me to meet Google co-founder Sergey Brin at CES 2012, Sebastian Thrun (Google X, Stanford Artificial Intelligence, Udacity, Inventor of the Google Self-driving Car) and Steve Lee (Manager of Google Maps for Mobile, Latitude and Google X), I was speaking with them for about 5 minutes! 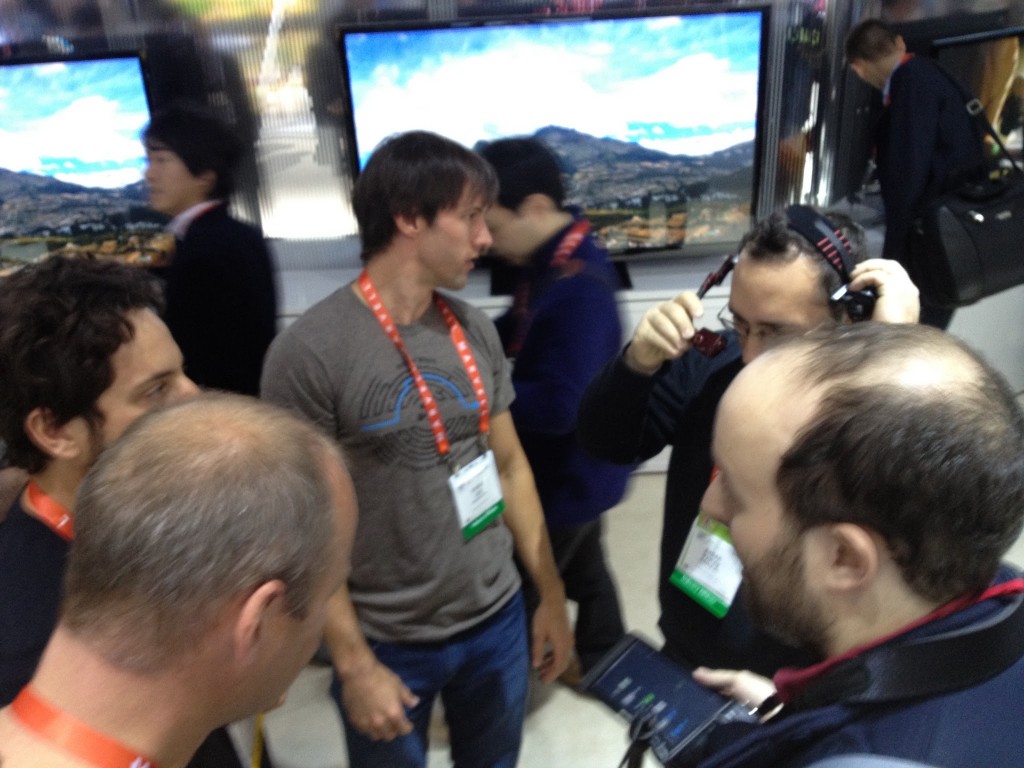 I am really lucky to be one of the first few people in the world to be able experiment with this headmounted computer (they have manufactured less than 250 prototypes thus far). That caught the attention of Google co-founder Sergey Brin who approached me and asked me what it was! I got them to try some of the headmounted voice command software demos in the headset, talk about my $199 Archos 70b Internet Tablet with Honeycomb (and ICS later) which Archos claims to have nearly the third largest worldwide tablet market share with their 2 million Android tablets sold in 2011 (Sergey Brin knows Archos perfectly well it seems, Archos has been making Android tablets for over 2 years but has only gotten fully Google certified since using Honeycomb on their G9 tablet generation released 3 months ago).

Sergey Brin and his colleagues asked me if I thought headmounted monocular wearable computing was going to be big, I said yes of course. I consider it can be like the dashboard for ones life. Positionned a bit below the eye, it can provide augmented informations about your surroundings, display your emails, social media updates, search news alerts, chat messages and more, without the need to pull out your phone or tablet from your pocket. Of course for the mass market consumer audience, it needs to be nearly as compact as a bluetooth headset with a retractable micro-display and a priced below $500 to become an accessory interfacing by bluetooth to any Android phone or tablet. I expect this to start becoming huge later this year or soon after. Kopin is working with Motorola Solutions to mass manufacture an industrial version and they want to work on consumer oriented uses. I also expect wearable computing to become huge in the form of intelligent Android wrist watches such as the DVIP Phaeton and the I'm Watch (Casio GB 6900 G-Shock, Sony-Ericsson Liveview and Motorola Moto ACTV also qualify as early attempts)

I wish I had thought to suggest to Sergey Brin and his team when they asked me what was my CES highlight, that I could guide them 20 meters around the corner of the Samsung booth to the Texas Instruments booth that was showing the OMAP5 development kit and the $30 BOM OMAP4 Always Innovating HDMI Stick (similar to the more expensively priced FXI Tech Exynos 4 stick), instead I could only think of telling them that I liked the $75 Eken AllWinner 7" ICS tablet in the Hilton China hall which was so far away from Central Hall they probably didn't spend the time to go there.

2. E Ink provided me with a new demonstration of their latest technology in my E Ink On Every Smart Surface video. Featuring the 300DPI 11.5" E Ink screen, new high-speed stylus on E Ink demos (with the right collaborative text editing and collaborative stylus annotations software, this could be huge!), on devices like the Eton Rukus, E Ink for digital signage. All your local supermarkets may soon be using E Ink for showing prices in stores.

3. All Camcorder companies seem to wake up to the idea of including low power high performance WiFi streaming and upload into consumer camcorders. See my videos of the Sony Bloggie Live, Toshiba Camileo Air10, Canon HF M52. This is awesome! WiFi in camcorders has been on my wishlist of camcorder features since my post of August 2nd 2008 and my updated camcorder wish-list post of January 31st 2010. Finally the camcorder makers are waking up and differentiating! There still are a bunch of features that I would like from these camcorders. High-quality wireless (multi-Bluetooth) and wired external microphones support. 1080p recording and at the same time live WiFi video streaming, Google+ Hangouts live streaming video upload. Automatic resumable YouTube WiFi upload in between takes. Touch screens to edit Titles, Descriptions, Tags right from the camcorder. WiFi upload must be as fast as using a Laptop. But for sure they are on the right track! I'm looking forward to Panasonic's Sanyo HD3000 level entry into this market, hopefully with all these WiFi features and more!

6. OLPC XO-3 shown for the first time!, OLPC does it again, this time revolutionizing the use of tablets for education, pricing it below $100 for mass orders, building it sturdy, unbreakable, sunlight readable with a 8" Pixel Qi, with a solar charger in the screen cover.

8. 4K HDTVs are comming! Yeah! 4K 55" HDTVs are always the most awesome demonstrations at trade shows and have been for the past 3-4 years! The arguments by supposed home theater experts that 4K is not usable in living rooms are not true! 4K is fantastic, fenomenal technology to have in the home! Just put your 8 megapixel pictures on an SD card, see those pictures on that 4K 55" HDTV, and be ready to faint, standing up close to the screen the quality is spectacular. Consumers and even professional photographers never get to see the full detail and resolution of their high megapixel photography. Unless you zoom in on pictures, you never get to see more than 2 megapixel of your pictures quality! With a 4K screen in your living room and that you can use as office desktop monitor, the 4K screens are going to be revolutionary. At CES 2012, Sharp claims their 4K-ICC 55" TV is to be mass manufactured and launched at consumer oriented pricing later this year! Samsung showed a totally awesome 70" 4K TV. I have a feeling that Sharp, Toshiba, Samsung and others are just about to launch 4K at hopefully way below $10 thousand, hopefully below $2000 soon! If it's going to be $1999, I recommend everyone save money to get one. As source, all Hollywood movies are already digitized to 4K and that can fit on a regular Blu-ray disc, streamed from YouTube 4K or over 50 4K movies can fit on a 2TB hard drive.

12. iRiver Kibot, the small new robots are cool, basic stuff for now. Within 10-15 years we'll be having ARM Powered Robots take care of everything in our homes, washing dishes, take out the trash, cook the food, everything else!

13. 55" OLED screens shown by Samsung and LG. Those are cool for sure! But I expect they are way more expensive to manufacture than 4K LCD screens of the same size today.

15. New Samsung Galaxy S2 and Galaxy Note clones are invading China! Kente shows some examples. Consider that excellent 4.3" capacitive WVGA 3G-ready Android phones are being sold below $100 in China by now. Check back here on ARMdevices.net during the next few months for a lot of news and coverage on these. Also a cheap new Android phone design by ZTE.

17. The Huawei Ascend P1 and P1 S are awesome looking OMAP4460 1.5Ghz 4.3" Super AMOLED Plus 6.65mm thinnest Smartphone in the world. I think Huawei plans to be a huge player in the worldwide smartphones market. Look for this and much more awesome Huawei Android Smartphones coming out. Their main advantage may be their aggresively competitive pricing. If this phone is sold for $299 unlocked, who wouldn't buy it?

18. I did my first live Google+ Hangouts On Air from CES, but because of the interference I couldn't reliably do it at the CES show floor with my headmounted augmented video-blogging system. But I did it every morning on my way between my hotels and the CES showfloor in my series of CES 2012 Monorail Hangouts: 1, 2, 3. I hope to soon do much more impressive things with the Google+ Hangouts On Air features! Expect quality live and on-demand Hangout entertainment from my website at the level of the Hangouts with Barack Obama and Desmond Tutu!