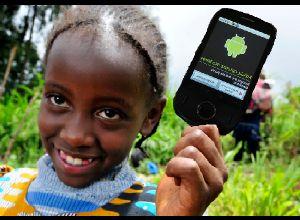 SingularityHub.com publishes this article about the explosion of access to cheap Android phones in the developing world. Already 350 thousand $80 Huawei IDEOS have been sold through Kenya's carrier Safaricom. Kenya has a population of 41 million people, 40% are said to live with less than $2 per day.

The developing world, Africa, BRIC countries Brazil, Russia, India, China, access to cheaper Android in those countries, that is the most interesting story in technology today. Sure we will all also get better, faster, more powerful, more colorful and more featureful gadgets soon also. But the idea that 5 Billion people may soon experience the Internet for the first time through Android smart phones, and thinking of what that can potentially do to improve peoples lives, that is the biggest story.

We're talking better farming, better healthcare, better commerce, better education, better democracy. The potential is immense. Hopefully technology companies are really attentive, hopefully software developers are imaginative, hopefully telecom carriers and Governments embrace this for all and very fast, Android may reach sub-$50 phones before the end of this year to even further accelerate the reach and accessibility.

Here's my video of the Huawei IDEOS as it was unveiled for the first time at the IFA 2010 consumer electronics show in Berlin (the next IFA 2011 is coming up in less than 2 weeks, I will provide you with a full video coverage of all the latest ARM Powered devices shown there):

Follow this blog for the latest news on the cheapest Android phones, I am trying to find some new MTK6573, ST U6715, MSM7227 and the upcoming new cheaper smart phone platforms out of China and elsewhere. Look forward to a lot of crazy cheap Android smart phone news in the months to come. By the way, I've used my $87 FG8 for the past 3 months as my main phone and it has worked great.

Google buys Hardware company for $12.5 Billion
Samsung to unveil Nexus Prime next week at IFA Berlin? I will video-blog it