Today at the VidCon 2010 conference, we announced support for videos shot in 4K (a reference resolution of 4096 x 3072), meaning that now we support original video resolution from 360p all the way up to 4096p.

We always want videos on YouTube to be available in the highest quality possible, as creators intend. In December of last year, we announced support for 1080p, or full HD. At 1096 x 3072 pixels, 4K is nearly four times the size of 1080p. To view any video in a source resolution greater than 1080p, select "Original" in the video quality pulldown menu: 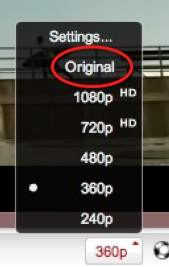 - WHOAAAWWW! Is this 1st of April or something? Is Google talking for real?

- What is the bitrate going to be for 4K? My guess, based on calculating the bitrate per pixel of 2mbit/s for Youtube 720p and 4mbit/s for Youtube 1080p is that for 4K it would be something like 24mbit/s. That's within the same bitrate as our 15 year old DV format (like miniDV tapes). That's like the top bitrate established for 1080p AVCHD format. This is totally manageable! We can get 50mbit/s and 100mbit/s "easilly" over here in Scandinavia. If Google would provide full bandwidth delivery of Youtube 4K worldwide, we could seriously enjoy this!

- I wish the LCD and Projector industry focus on making Quad HD or 4K screens (however they should be called) instead of that 3D fad thing. Logically, thanks to Youtube 4K, we could be getting 4K HDTVs and projectors for less than $1000 by this time next year. Because the processors are already ready, they just need to be put into mass manufactured screens and projectors.

Another point in Youtube's announcement that I would like to learn something about and maybe start to counter:

To give some perspective on the size of 4K, the ideal screen size for a 4K video is 25 feet; IMAX movies are projected through two 2k resolution projectors.

I have seen Quad HD LCD screens at trade shows. Those were in the 50-82" range I think. They are absolutely amazing (Sergey Brin has one), some of the most impressive demonstrations I have ever seen in going to most of the trade shows since 2005. See my video of the Samsung 3840x2160p 82" LCD HDTV. See my video of the JVC 4K2K HDTV and Projector.

I believe that one can see higher than 1080p on HDTV starting below 50" sizes. The iPhone 4 has a 326DPI 3.5" screen. I don't see why we can't get higher DPI on our HDTVs than 52DPI on a 42" HDTV? Why should the iPhone 4 have a 6x higher DPI than my 42" 1080p Full HD HDTV? If they were to put 4K processor in my 42" HDTV, it would still "only" have a 111DPI, still much less than what they have done on the iPhone 4. Sure my 42" HDTV has 132 times larger surface area than an iPhone (a 42" HDTV could fit 132 of iPhone's screens), if you want to set a standard for what the DPI per field of vision should be based on the iPhone 4 held at half arms length (50cm) with 326DPI screen, then a 42" HDTV with 4K screen of 111DPI would need to be seen within 1.5 meters of a distance to get the same effect. Usually a sofa is placed 4-6 meters away from the LCD HDTV. Perhaps people will want to sit closer to the screen to experience something closer to 4K quality. At the photo exhibitions and museums of paintings, it is common for people to approach the images at distances closer than 1 meter to appreciate the details in the image. Perhaps 4K would be more suitable sizes above 50" and preferably perhaps even above 60" in diagonal. 67" 4K HDTV would have a 70DPI thus achieve same pixels per angle of view at 2.5 meters distance. 65" 1080p HDTV is $2500 today at Best Buy, how much more would it cost to include the latest 4K processor in there to stream 4K contents from Youtube 4K? Perhaps 4K HDTVs in the living room can be displaying any of our existing 12megapixel images taken with any recent digital photo camera, slideshows on a 4K screen look awesome. Thus Picasa could be streaming out some amazing customized and personalized slideshows, to be marvelled at in the living room at closer distance than usual.

Another point in Youtube's announcement that I would like to discuss:

Because 4K represents the highest quality of video available, there are a few limitations that you should be aware of. First off, video cameras that shoot in 4K aren’t cheap, and projectors that show videos in 4K are typically the size of a small refrigerator. And, as we mentioned, watching these videos on YouTube will require super-fast broadband.

Now, let's discuss, when are cheap 4K encoders going to be available? What hardware is required in the camcorder to encode that resolution effectively (and not also use up too much bandwidth in its compression). How expensive are the 4K decoders really?

Is 4K support something that could come with the upcoming ARM Cortex A9 processors?

I would think that this could be a nice challenge for ARM processor providers to work towards. They have now reached 1080p playback for a while already, even though it only really comes with ARM Cortex A9 to small low power consumer devices. Media streamers though have done 1080p playback for a few years already. I filmed the first 1080p KiSS Technology players at CeBIT 2004:

With Moore's law, doubling of playback processing every 18 months, 4K decoders should have been ready since the second half of 2008 already, and in Set-top-box devices that shouldn't cost more than the KiSS Technology DP-600 shown in 2004, less than $300 today? Perhaps next year we will be able to see Google TV boxes with 4K and Youtube 4K streaming support on $2K 65" 4K LCD HDTVs or $1K 4K projectors?