The latest monthly report by AdMob on US-based web usage on smartphones (of sites and apps where AdMob is serving ads) shows that Android phones combined are now being used more than the iphone OS devices. 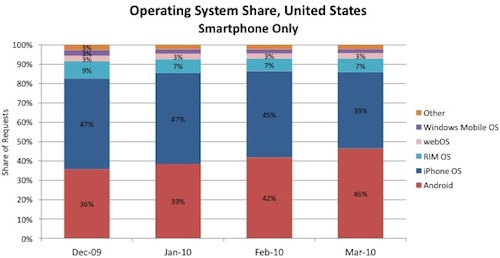 By these numbers, one can speculate if the overall share of Android devices sold per month in the USA is about to overtake the overall monthly share of sold iPhones, iPod touch and iPads.

Consider that most of the iphone OS share consists of iphones and ipod touch that were bought by consumers during these past 2 years. While most of the Android devices used at this point were purchased during the past 6 months. So this may increase the likelihood that Android sales per month have already overtaken the monthly sales of iPhones.

Consider that the Chinese market is getting several "Ophone" branded phones, which are based on modified Android OS source code. Consider also that the US and European market have not yet received significantly cheaper Android phones on their markets although many are planned to be released soon. Once pre-paid or totally unlocked Android phones are sold below $200 without contracts, those may expand the market share of Android phones even faster, as consumers likely much prefer a $200 unlocked phone or locked on pre-paid plans than a $200 locked phone that comes with a $3500 2-year contract.

In AdMob's numbers the Google Nexus One device is only achieving a 2% marketshare. My guess is that Google doesn't need to sell more Nexus Ones at this point. The Nexus One is only there to push the Android market forward. Google isn't going to compete with its partners yet. Nexus One is basically like a Development Kit for the Android industry that is also available to early adopters who can buy it over the web. But the more interesting business models will come once Google is selling Android phones at http://google.com/phone at below $200 unlocked and out of contracts.