Slashgear.com went to Texas Instrument's Dallas Texas headquarters to write an article about the OMAP4 dual-core ARM Cortex A9 1ghz development platforms which can decode 3 videos at the same time, with 1080p HDMI video output, a built-in pico-projector, significantly higher resolution support than WVGA 800x480 for the on board screen (1024x600? 1280x720?), 1080p 24/30fps video encoding, “universal decode” which they say means it will support playback of all video codecs (High Profile h264 MKV 1080p at up to 50mbit/s?). 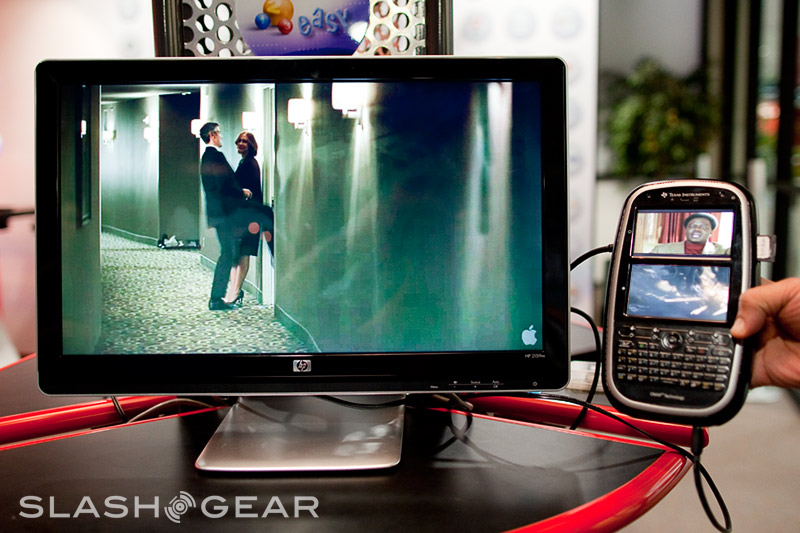 The chipset can simultaneously record 1080p and D1 (e.g. regular TV resolution) footage, as well as still images, giving you an HD copy for local playback and a smaller version for uploading. Meanwhile there’s enough processor grunt to spare for digital video stabilisation, both for recording and, potentially, for stabilising the pico-projector when you’re operating it handheld.

Wow, it will be nice to encode full quality 1080p at high bitrate for archiving and at the same time record D1 for uploading to the web. Although my favorite combination would be something like a combined 20mbit/s 1080p and a 720p 4mbit/s encoded with high encoding complexity to provide a good baseline 720p version to be uploaded to the web. Though it would also be nice to record decent 1080p which Youtube supports, and at the same time encode D1 at low bitrates to stream on 3G networks or to stream over WiFi to live video services like Qik or Ustream.

And in terms of how Texas Instrument OMAP4 compares with Nvidia Tegra2:

While production devices based on the Tegra 2 aren’t available yet, TI reckon there are several points at which they eclipse their rival. According to Marcelo O Vieria, general manager of the OMAP business group, the OMAP4 1080p video codec is stronger than that of the Tegra 2, in fact he reckons TI “have a better video engine than [NVIDIA] do”. OMAP4 also supports 20-megapixel or higher image processing, as well as three simultaneous displays, and it has significantly more memory bandwidth than Tegra 2 which means it’s better at multitasking. Worth remembering, too, is that OMAP4 is suited to smartphones, which is an area Tegra is yet to extend into.

This all just sounds very awesome, I look forward to see Texas Instruments demonstrate their new OMAP4 platform in Mobile Computing products and reference designs, hopefully as soon as Mobile World Congress in Barcelona between the 15-18th February, where I plan to film 50 new videos of the latest most awesome ARM Powered devices.

Be sure to check out the full article with pictures and video at Slashgear.com: http://www.slashgear.com/texas-instruments-omap4-hands-on-0172231/