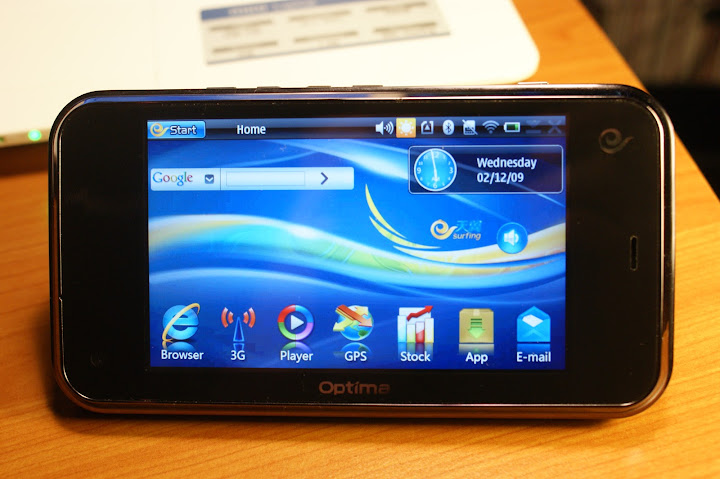 Since I filmed such a great video of it at IFA, OPTIMA TECHNOLOGY(SHENZHEN)CO.,LTD sent me a review sample of their new Optima OP5-E for me to publish an exclusive hands-on video-review. The new Optima OP5-E Maemo Linux based MID is now being released by http://www.chinaoptima.com/ and China Telecom on the Chinese market and they are now looking for global distributors (if many people demand it, there may be a distributor bringing this device to your local 3G telecoms market or sell it unlocked). (contact [email protected] if you might be interested in ordering 300 units or more).

Maemo is the biggest potential alternative to Android Linux OS for embedded devices, mobile internet devices, pocket computers or phones, however you want to call them. This Optima OP5-E is the worlds first Maemo device that is not manufactured by Nokia. This makes the Optima OP5-E a product to check out for people who want to see how Maemo could make a commercial impact outside of Nokia in the open-source embedded device market.

It has a 4.3" 800x480 resistive touch screen (capacitative at that size and price does not yet exist), 806mhz Marvell PXA310+ ARM processor, 128MB RAM, built-in 3G CDMA sim card reader (HSDPA version coming next month), built-in GPS, built-in Bluetooth, a high capacity exchangeable 2600mAh battery. All that comes for around $500 unlocked and could be sold at $300 or lower subsidized with a subscription plan from the carrier. It can support either VOIP and IM or regular voice and sms, that is up to the carrier how they want to integrate that feature.

The really cool things about this product are following:

- It has a built-in 3G CDMA modem with sim card reader.

- Maemo may have quite a lot of dedicated open-source programmers already hanging out in the http://maemo.org/community/maemo-developers/ and who may have developed some pretty interesting Maemo based applications already (which I am going to check out and publish another video when I have found out which would be the best applications that work on this device and how much porting may be required to eventually adapt software that is already developed for the Nokia Maemo Linux tablets).

- It comes with a larger touch screen than on the existing range of Smartphones, significantly larger than the Nokia N900 screen, yet this product can be sold cheaper than all those smaller smartphones. I think that a larger 800x480 medium density screen is very valuable and I think that all those 3.5" smartphones on the market have too small of a screen for Internet browsing and video playback use.

Things that I think Optima and eventually the open-source developers may improve on this device (based on my initial tests):

- The whole Maemo Linux user interfaces I think could use some optimizations and fine tuning, this device does support firmware updates, I don't know how often Optima may release firmware updates for it to improve on all these things.

- The Firefox Fennec browser that is included, might not be as smooth and fast as the Webkit based browser that one can find on Android, the Palm Pre and the iPhone. Though, my guess is that it should be possible to port a version of a Webkit based browser to Maemo (if it hasn't been done already), and I am sure this browser could be optimized and improved in firmware updates.

- Obviously, I would like to have HSDPA instead of CDMA 3G modem in this, to have i work here in Europe, Optima has told me that the HSDPA version will be released in about a month from now (maybe a bit later, I guess it may depend how soon interested importers from Europe and other HSDPA markets demand for it to be made available)

- It does not seem to have a TV output (unless somehow that functionality exists within the mini-jack output, but I guess it's not there). Too bad, cause I enjoy watching DivX videos outputted from such a device onto a TV. Though, most existing smartphones on the market such as blackberry, palm pre and the iphone don't have that feature either.

My pictures of it on Picasa:

You can discuss this product in the dedicated forum section for it at http://forum.armdevices.net/viewforum.php?f=5

Here are the full official specs and press pictures: