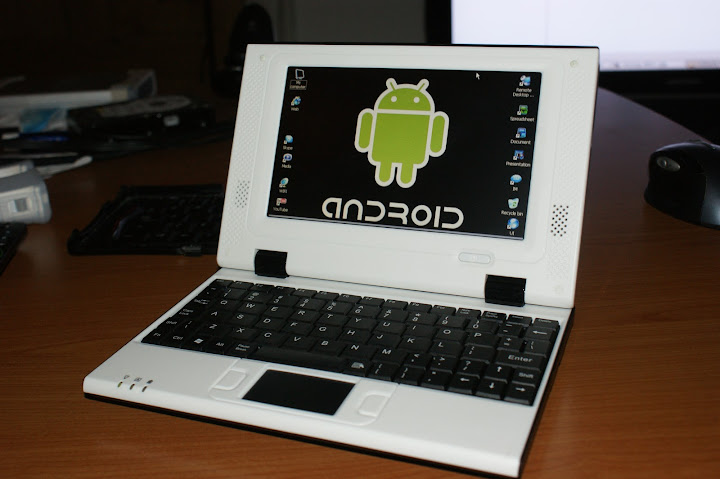 Here is the cheapest laptop in the world. It can run Android since it is based on a Samsung ARM926EJ-S3C2450 processor, but for now this review unit that I am reviewing in this video only runs Windows CE 5.0. Check back hopefully within a month for another video when Menq may have sent me a firmware upgrade to use Android instead of Windows CE.

As I filmed the Menq Easypc E760 last year at IFA, Menq is a chinese company interested in providing the worlds cheapest laptop designs. Last year, they were using a 480x320 resolution 7-inch screen to reach the $89 price point for laptops, now they are able to include a 800x480 resolution 7-inch screen. Find more information about this Menq EasyPC E790 at http://www.menqgroup.com/products/pro/E790.asp

The coming of the ARM based laptops, in my opinion, are indicative of the real revolution that is imminent for the Laptop and Desktop computer industry. As soon as ARM based laptops can run a full Chrome Browser, with unlimited amounts of opened tabs all running smoothly, with Flash support, full Javascripts support and basic multimedia functions, then I think the turning point will be reached where most consumers in the world, and especially in developing countries, will be buying only the cheapest laptops.

Web Browsing is all that most people need, with clever HTML5 enabled Chrome browser running on any type of Embedded OS, be it Android or Ubuntu, even offline application could be run reliably from within the browser engine. Anything most people really need will work.

As you can see in my video review, this Menq EasyPC E790 is kind of slow since it is based on the ARM9 processor technology. For not much more cost, though, the Chinese laptop manufacturers could soon be using the ARM Cortex A8 processor technology, which should provide for a 5-10 times faster web browsing experience, and even faster if using an upcoming ARM optimized Chrome browser.

This laptop, I think, is giving us a taste of the future of laptops. Soon all laptops will cost $80 or less, run 10 hours or more on a small and cheap 3-cell battery, even over 20 hour battery life if using the Pixel Qi screen technology. It is also providing a sensation for the what we can expect from the next generation OLPC One Laptop Per Child XO-1.75 to be released by OLPC with ARM processor technology inside instead of X86.

If using ARM9, OLPC could definitely sell laptops at below $80, but maybe ARM Cortex A8 will be preferable at around $10-$20 extra in manufacturing costs, and the innovative new Pixel Qi screen, WiFi meshing, more RAM and storage, could bring the next ARM based OLPC XO-1.75 laptop coser to $125 per laptop, to reach below $100 with mass production. In any ways, I am really looking forward to see the upcoming releases of the ARM Cortex A8 based laptops, yet still, this ARM9 based laptop is very interesting, and if you want your local supermarket to start selling them, I suggest you phone your local supermarket headquarters, and ask them to contact Menq and order for example 5000 pieces or more so they can get them at the price of $80 per unit and sell it to you for probably below $100 in supermarkets.

Pictures of this laptop:

Here are some of my previous famous videos of this type of cheap ARM based revolutionary laptops: