Rockchip organized an event in China and advertised on Times Square in New York to promote its new RK3168 dual-core ARM Cortex-A9 solution on a 28nm process design, providing extremely low power consumption yet delivering quite higher performance at near same price (I'm told) as the new Allwinner A20 dual-core ARM Cortex-A7. 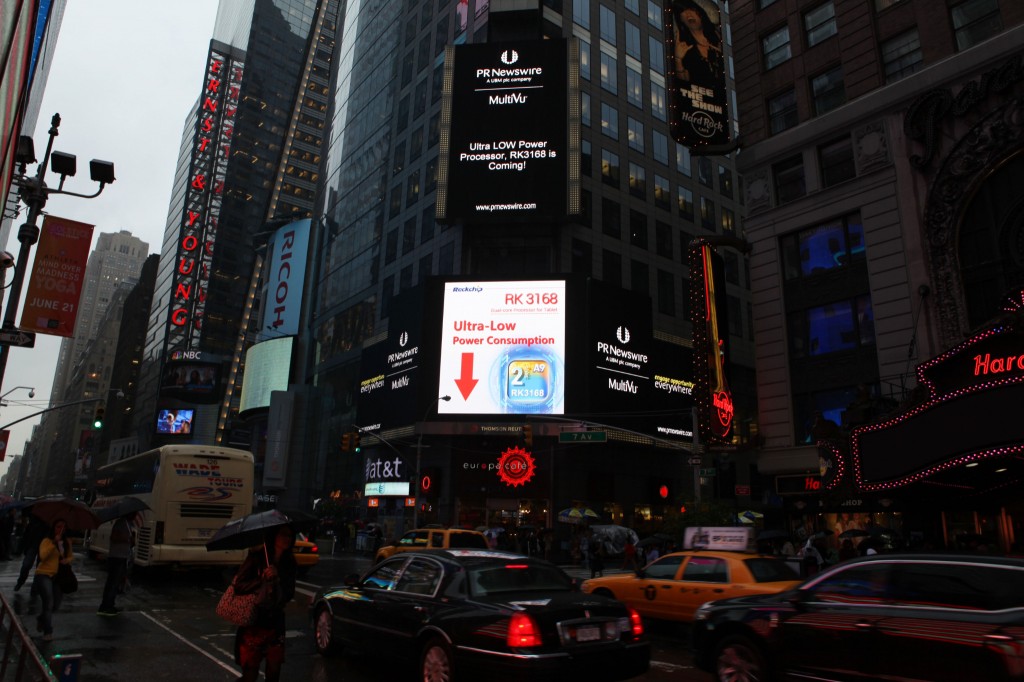 Here's Rockchip's promotional arguments for the RK3168 and why it may capture a huge part of the growing low cost Tablet market, this was released by Rockchip as they announced the first 800K processor unit orders last week:

People in the industry claim that dual-core on the foreign trade market will replace single-core since Rockchips has released its RK3168 in Hong Kong Electronics Fair in April. According to sources, overseas customers have placed a large 800K order on RK3168, which is also very rare in domestic tablet PC history for finalizing order so fast.

According to estimates made by people within this industry, foreign trade market accounts for nearly 70% sales volume of tablet PC in 2012 among which 60%-70% are low-end 7-inch tablets that adopt single-core A8 chip. By judging the entire market, low-end 7-inch tablet with sales price at 45-50 US dollars will occupy 40%-50% sales volume of the market. Thus, single-core A8 dominates the low-end market in 2012 while all chip factories have released more than 5 double-core chips successively in 2013, resulting in that dual-core replacing single-core becomes an inevitable trend.

What are the advantages of this Rockchips RK3168 dual-core A9 chip oriented towards low-power consumption, to make this chip become so popular in the foreign trade markets?

In terms of shipment speed, RK3168 is easy for mass production due to the fact that there are only more than three hundred RK3168PCBA components and four pore plates. Moreover, RK3168 takes the lead to make quad-core and dual-core chips share one tablet, realizing dual purpose of one tablet and it is able to pin to pin with RK3188 quad-core chip to quickly enable quad-core chip and dual-core chip to share one tablet. This is also beneficial for solution provider and ODM manufacture to save more time and cost during product development, obtain a more comprehensive product layout, quickly handle changes on dual-core/quad-core chips markets and offer an obvious advantage on product price.

Generally, a variety of certifications are required in foreign trade market. At present, RK3168 scheme has been widely upgraded as 4.2.2OS and passed GMS and CTS certifications, which can help customers to enter mainstream market in developed regions of Europe and the United States. It is said that this chip will be adopted by the majority of international manufacturers, earn trust from more small and medium-sized enterprise customers and maintain a more powerful subsequent development. 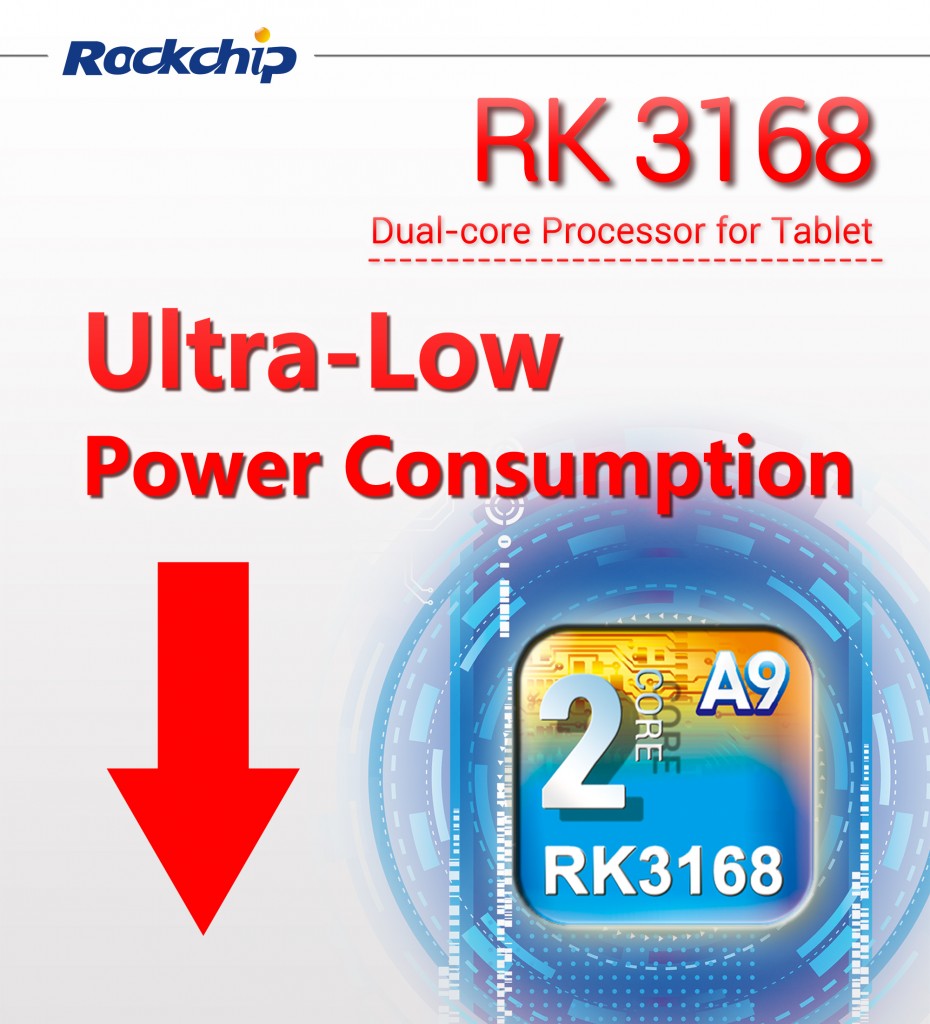 Here's the new press release from Rockchip talking about their recent promotional event talking about the availability of their new 28nm dual-core ARM Cortex-A9 solution for the worldwide market out of Shenzhen China:

SHENZHEN, China May 23, 2013 /PRNewswire/ -- At 3 pm on May 21, Fuzhou Rockchip Electronics Co., Ltd. held the promotion of “A9 Dual-core Chip RK3168 of the World's Lowest Power Consumption” in Midsummer Hall on the third floor of Shenzhen Pavilion Hotel. The promotion attracted a large number of solution providers, brand manufacturers and trade media, showing that RK3168 had entered the stage of mass production.

Design: Quad-dual compatible, one board for double purposes;

Performance: The performance of RK3168 with dual-A9 core is two times higher than dual-A7 program with half the power consumption, because it uses 28nm. RK3168 supports the latest Android 4.2.2 system and Miracast screen mirror, and achieves multimedia sharing between mobile phones, tablet PCs and TVs.

RK3168 chips have world-class ultra-low power consumption, only half that of the Cortex-A7 dual-core chip, and is lower than almost all the dual-core tablet PCs on the market. A 7-inch tablet PC with 3000mAh battery can play HD video for eight hours continuously. RK3168 uses ARM Cortex-A9 dual-core architecture, the highest frequency is 1.2GHz, and the chip has high overall performance, which is higher than the industry’s current dual-core chip solution.

Quad-dual compatible, with one board for double purposes, is the most significant feature of Rockchip RK3168. At present, only RK3168 can achieve quick switching between dual-core and quad-core of the same PCB board. Dual-core RK3168 can be replaced with a high-end 28nm RK3188 quad-core chip pin to pin, so that solution providers and brand developers can save costs and time in product development, have a more comprehensive product layout and quickly respond to the changes in the dual-core / quad-core market.

The RK3168 program has passed the Google Global GMS and CTS certification, and can easily help customers access the mainstream market in Europe and America.

Summary:
Nowadays, quad-core has become the hottest topic in the tablet PC market, but single-core still occupies a large part of the market. Dual-core is expected to replace single core this year. RK3168 features high-end performance, low power consumption and is cost effective, getting the industry’s attention and generating a new round of competition in the dual-core market.

Follow this space, this is about upgrading the performance of the low cost Tablet market worldwide, that low-cost 7" Android tablet space occupies over 50% of a rapidly growing worldwide tablet market, depending on how useful people can make those 7" Android tablets be for productivity, learning and more in the months to come. It is thus possible that RK3168 shipments will exceed the overall RK3188 shipments in the months to come. Check back here on http://ARMdevices.net for the latest Shenzhen products using Rockchip in the days to come.