My take on Samsung at IFA, awesome but perhaps misplaced

Probably the highlight of this IFA show for me has thus far been the unveiling of the awesome Samsung Galaxy Note (2), Samsung Galaxy S2 LTE and Samsung Galaxy Tab 7.7 for reasons of the pure awesomeness to see the new high resolution Super AMOLED screens in action (4.5", 5.3" and 7.7") and to get a feeling of the upcoming probable Nexus Prime hardware experience.

There is some talk on blogs about Samsung removing the Samsung Galaxy Tab 7.7 from the showfloor today on http://www.techmeme.com/110903/p15#a110903p15 and this has now become the conspiracy theory here in Berlin around the IFA show.

I do not believe for one second that Apple has any authority over Samsung at IFA, regardless of the bogus lawsuits going on in bogus court rooms in Dusseldorf, Netherlands and Australia. Samsung is paying the IFA consumer electronics show millions of euros for their hall, over many years, Apple never spent one single cent at IFA or at any other trade shows worldwide for that matter. Apple thinks they are too cool to compete in trade shows, Apple does not want people to think of them as a mere competitor in a market.

Here's what I think Samsung might be thinking right now, and what I have been saying from the first second I saw their latest devices:

1. Samsung is now the worlds leading Smart Phone manufacturer, in front of Apple.

2. Just like Apple, Samsung makes much higher profit margins on the smartphones than on the tablets.

3. Even with the new Super AMOLED factory now in function in South Korea, Samsung can simply not output enough Super AMOLED screens of all the different sizes and types before this Christmas sales.

5. Samsung needs to make about 50 million Smartphone sized Super AMOLED Plus screens during these next few months, there is no space in their factory to also make 7.7" such screens, and it basically costs 3x to 4x more to make a 7.7" Super AMOLED screen compared to a 4.5" size, cause you can fit upwards 3x to 4x more smartphone sized screens on their manufacturing process.

7. The reason Samsung can make Super AMOLED screens today even though I would guess the Super AMOLED Plus screen costs 2x more than the highest-end LCD, is that Samsung is still making $250 profit or more per smartphone when they sell them upwards $500 through carriers and unlocked.

8. My main complaint on the Samsung Galaxy Tab 7.7 form factor is that it is too wide to fit normal jacket pockets, I cannot fit it inside of my jacket pocket. That means that it makes it much less likely people will carry it around everywhere, but that it would have to mostly stay at home. While being shown at IFA, the device did have a sticker saying something like "this may not be the final design", maybe Samsung has figured out from mine and others comments at the show, that if they really want to release a 7.7" tablet, they may have to consider trying to cut more of the bezel off of the device.

Here are some pictures comparing the my Archos 70 Internet Tablet that I have used every day for the past 11 months because I can carry it everywhere in my jacket pocket vs the Samsung Galaxy Tab 7.7" shown at IFA that simply does not fit in jacket pockets so has to stay at home: 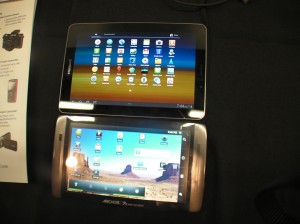 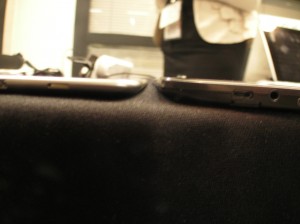 While the Samsung Galaxy Note also is fantasticly awesome, my suggestion to technology fans is not to expect that Samsung can manufacture enough of those 5.3" HD Super AMOLED screens before the end of this year. Also, Samsung may be realizing that it may be very hard to sell the feature of using a stylus on top of a capacitive screen, it may be too hard for them to lower the lag time and increase the accuracy enough to make it usable. In which situations does mass market consumers really want to use a stylus often? I can think of situations such as collaborating in real-time on annotating text, but I don't think a light emitting Super AMOLED screen is the right type of screen for that usage.

So where does Samsung go from here? My guess is that they will focus as much of the Super AMOLED factory as they can on making 4.3" and 4.5" screens for the upcoming Nexus Prime = Samsung Galaxy S2 = Samsung Galaxy S2 LTE = Verizon Droid Prime, etc. This is where they are getting the most profit. And while the Samsung Galaxy Note might come out, and can definitely sell plenty more than Dell Stream 5 did a year ago, I think Samsung is probably going to use LCD for the Tablets that they'll release before the end of this year. My guess is Samsung may release updates for their 7" and 10.1" tablets before the end of this year, and those will likely use LCD and not Super AMOLED.

In the medium term, I guess that AMOLED may be phased out again, but it already cannot be considered a failure in any way, it has provided Samsung with a unique differentiator in their market share gaining activities in the most important smartphone market. By the time AMOLED factories may be closed in 2-3 years, the quality of LCD at that time will have increased so much, with technologies such as Pixel Qi, IPS and FFS, that it will not make sense to make any AMOLED anymore. Most importantly, the profit margins on smartphones will quickly be reduced as the smartphone becomes a commodity, the profit margins will not anymore allow for the price difference that there is between LCD and AMOLED.