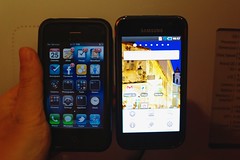 Samsung already sold 5 million Galaxy S Android smart phones since its June 1st release. Only 4 months since Galaxy S release, and with the imminent release of cheaper Android smartphones such as the Samsung Intercept, the daily rate at which Samsung is selling Android phones may soon overtake Apple's iPhone. I believe it could be possible that Samsung will be selling more Android smartphones per day than Apple will be selling of iPhones by the end of this year.

One month ago, Samsung's official smartphone sales target is 25 million units for this year. Apple sold 25.1 million iphones in 2009.

Samsung Mobile Display plans to spend 2.5 trillion South Korean won (US$2.1 billion) to set up the next-generation production facility. The plant, situated in Tang Jung in the southern part of Seoul, primarily will be used to manufacture three-inch panels used for mobile phones.