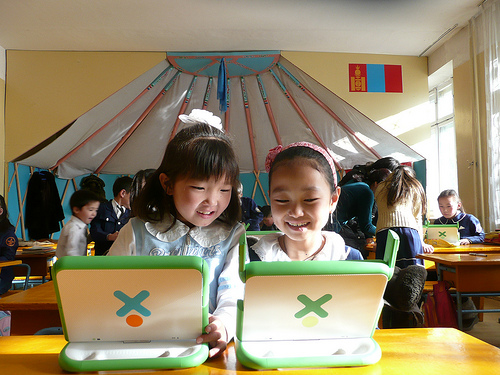 When the OLPC project's XO laptops are used in schools, the results are transforming education around the world. It’s getting children excited about school. It’s getting attendance to increase by 100 percent, which it does in most places where OLPC has deployed laptops, where more girls go to school, where the truancy drops to zero, where children take laptops home and teach their parents how to use them.

The One Laptop Per Child engineers are working on an ARM Powered XO 1.75 laptop which is going to be released within a year from now. My guess is that they might be optimizing it for using the Marvell Armada 610 or 510 processor.

For example, the Pixel Qi screen is supposed to consume only 0.1W when backlight is turned off, once Pixel Qi has optimized refresh rates and other details which they have said they will be able to do over the next few months. The whole ARM Processor System on Chip should not consume nearly any power at all when nothing is moving on the screen, when the student for example is just reading an e-book. Then how low really can the power consumption go? Shouldn't 0.2W power consumption in offline e-reader mode be a realistic goal? Thus shouldn't the child get 100 minutes of use for 1 minute of cranking?

Since most of the children served by laptops from the OLPC project live off the grid, and may not get electricity for many years, getting the power consumption down on the laptops is one of OLPC's main engineering goals. This and lowering the cost of the laptops to below $100 per laptop are the main goals of the OLPC project.

I'd like to see all the major ARM Processor makers announce that they will support OLPC in that goal, so that the XO 1.75 may not only be based on the Marvell processor, but that other processors will be optimized for it as well. All ARM Powered laptops shall point towards the same goals in my opinion, also in terms of software optimizations. We need fast and smooth web browsers, have Google and everyone else focus on optimizing the web browsing speed using the Chrome browser. While having everyone focus on one OS for all ARM Powered laptops may be a good idea eventually, until we figure out which OS are the best for which use, having easy multi-boot menus work and utilizing a minimal of extra storage space to ship laptops with multiple choices of Linux OS such as shipping ARM Powered XO laptops with Fedora based Sugar OS, with a Gnome desktop alternative, and with eventually an alternative based on a combination of Android and Chrome OS may be the best solution.

Rich countries need to prioritize the OLPC project in deploying revolutionary education using computers and Internet technology all over the world.