I think we really need to replace cash and credit cards with our smartphones as soon as possible. NFC is now being included in pretty much evey major brand Android phone released since the beginning of the year, there are still hundreds of millions of phones in the world that do not have NFC technology built-in, and some brands may still consider shipping devices without NFC. I've heard one consideration is that integrating NFC does cost some money and that the NFC antennae actually is kind of big and not too easy to integrate.

But, while it may take months or a year or so for 100% of all new phones and tablets to include NFC, here's the solution for the rest of the market to use their phones for payments and identification right now.

Stickers. Basically the sticker triggers the other device to send a message through the Internet to the identified device. Then the payment is done through the app, no need for a PIN code for payments below $25 or 25 Euros, while the bank can automatically choose to require that a pin code be typed in to approve larger payments.

The NFC is just a technology to make it easier to identify a mobile user with a fixed terminal or with another mobile user. Basically it's like a QR code but without having to aim a camera and scan a picture of it, and NFC can trigger actions on the receiving/emitting device. That triggering can thus work with simply a passive sticker on your non-NFC smartphone if the other NFC-enabled entity "simply" beams you the trigger action through the Internet. The only question I guess is how big is the Sticker, may it bother some users or are all non-NFC users going to be perfectly fine with putting such a sticker on the backs of their smartphones. The sticker may also work on the battery behind the case if that case is plastic based or metals that somehow do not interfere with the NFC signaling. 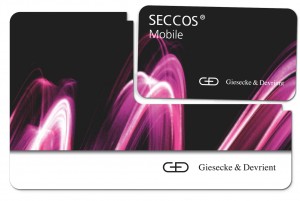 Munich, July 17, 2012 – G&D presents the first payment sticker to meet the specifications of the German banking industry. When the sticker is attached to a cell phone or smartphone, contactless payment becomes possible even if the device itself is not NFC-enabled. The SECCOS® Mobile payment sticker is certified for the MasterCard® contactless payment method PayPass™. This allows bank customers worldwide to pay bills at over 350,000 PayPass locations.

Although there are around 50 NFC-enabled smartphone models now available, the number of users is still relatively low. This has left the field open for contactless payment stickers to play an important role as a bridge technology on the road to mobile payment by cell phone.

Read the rest of the press release here: gi-de.com

Ice Computer, computer in a module
Koubachi at IFA 2012 ShowStoppers