I think carriers prefer Android mostly because it provides the most competitive hardware environment, with the best prices, the best hardware features and the best variety of components, styles, brands, choices for consumers and more. Tomi Ahonen of brightsideofnews.com writes:

The total Nokia Lumia line has been Osborned [announcement of a future product ahead of availability], not by Elop, but by Ballmer (...) by announcing no upgrade path to Windows Phone. (...) even after Nokia was brought in, today the combined market share of Windows Mobile and Windows Phone is down to 2% globally (with share still falling). (...) Ballmer says there won't be a migration path for Windows 8 either. Your existing WP7 based smartphone is an expensive paperweight: you have to buy a new smartphone to enjoy Windows 8 - the Microsoft handset partners team has shrunk to four: Nokia, HTC, Samsung and Huawei. Three of them - Samsung, HTC and Huawei do the majority of their smartphones on Android.

(The dotted line is when Elop was hired to join Nokia and here is the second part of that slide, showing what I originally used it for, to explain the madness of the Elop Microsoft strategy:) 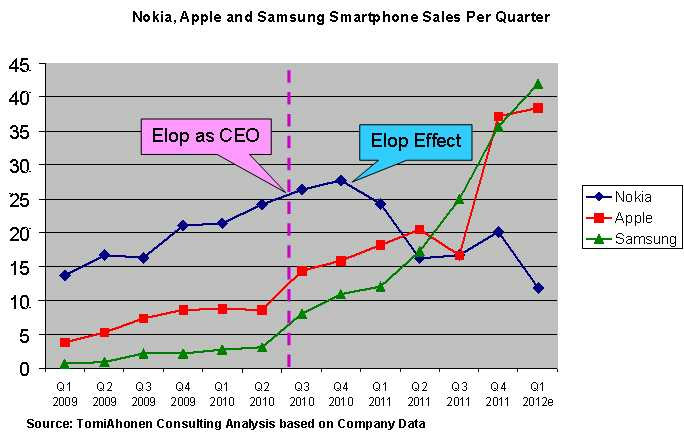 Stephen Elop admitted to the Nokia Shareholders Meeting that carriers don't like Skype 'of course' and that some carriers have taken the step to even refuse to sell any Windows Phone based smartphones, explicitly because Microsoft owns Skype. (...)

And this was not just hitting Nokia Lumia smartphone sales, it was hitting all brands of smartphones running Windows. Elop explained further that for more than a year, Microsoft had tried to negotiate with the carriers to get some resolution about the Skype issue - with kind threats like 'Skype will come in any case' (unhelpful) and that after a year of such 'persuasion' there were exactly zero carriers who had taken Microsoft's offer. (...)

This is about Microsoft now owning the hated Skype and being able to bankroll the biggest threat to the existence of mobile operators/carriers. (...)

The Windows dream of smartphones is now dying and money thrown by Nokia into this bottomless pit is money wasted.

The solution for Nokia I think is quite simple. Simply use Android now (2). With Android, Nokia can easily increase their sales by 50x within months. The same easy and obvious solution is the one for RIM. Just use Android like everyone else! Compete with your knowledge of hardware and services and don't try to own or control the ecosystem! Don't try to build AOL when everyone else is using the web!