EDIT: Google has not confirmed any pricing for the Google Phone Nexus One. You can read my latest post backing up my speculations on what I expect Google will price it, what I think Google should price it: http://armdevices.net/2009/12/16/the-blogosphere-reports-my-nexus-one-pricing-speculation-as-fact/

As I have been posting in comments on mediamemo.allthingsd.com, gizmodo.com and androidguys.com, I enjoy speculating about features and prices of phones and business models. So let me post here the prices that I expect this first Google Phone to be sold at and some of what I expect of its hardware specifications:

- $200 sold through all retailers, Best Buy, Amazon, Wal Mart and any others. Unlocked, for use on any network, but I think it may come with a so-called Google SIM card (read further below)

- Google may provide a subsidy up to $100 for long-time and very active Google users. So if you buy it online using your Google Account, they may provide you with an instant rebate. If you buy it for $200 in retail stores, Google can still provide you the online $100 rebate to use on the Google Android Marketplace, on Google Checkout stores or even on extra data for your Google SIM card (read futher below).

- My speculation is that Google may provide up to 100mb of free data usage per month to all Android users with a Google SIM card (read futher below). The 100mb per month would be enough for as much Google Voice, Gmail, Gtalk, and basic web browsing that most people need (disabling bandwidth intensive things such as images can easily be setup). No contracts needed for those 100mb per month, but those may only work for use on Google services, for low bandwidth Android apps or for basic web browsing. In any ways, there would be a bandwidth usage counter clearly displayed at the top of the Android user interface next to the battery meter. The free 100mb per month may be throttled and may sometimes be limited to GPRS type of speeds.

- Extra bandwidth could be purchased in one click, such as I expect 1GB for $10 or 5€ is possible. That extra GB of bandwidth would be usable at any point in time and not need to be renewed every month.

- A monthly $30 or 20€ bandwidth package would provide up to 5GB in the USA or 10GB in Europe per month of unrestricted and full speed 3G bandwidth usage.

- Thus the overall Bill Of Material and Manufacturing costs for a Google Nexus One is probably below $150, so Google can very likely sell it below $200 with 8GB built-in storage and with MicroSD for storage expansion. Google doesn't look for making profits on hardware, they will make their profits on ads over the several months or several years that the hardware is being used.

- All those bandwidth speculations would work using the Google SIM card on any unlocked Android phone. Though since the Nexus One would be unlocked, any other SIM card could be used as well. And thus, competitors or telecom carriers themselves can provide SIM cards with pre-paid, with or without subscriptions for other packages of data usage. I think Google would allow Microsoft and others to take part in financing those free 100mb per month so users would be able to use competing online services and VOIP providers for free as well.

The calculation and speculation for a worldwide Google SIM card bandwidth service should thus be based on trying to not only guess if carriers will allow Google to turn them into dumb pipes of bandwidth, on the other hand, we should try to guess what price Google may pay to buy 3G data bandwidth in bulk from the carriers and thus at what price Google may sell it back to Android users without the need of monthly data subscriptions. My guess is that $10 per GB in the USA and 5€ per GB in Europe should be more than enough payment for the 3G data bandwidth. And that most likely Google should be able to purchase that for much lower prices if Google negociates deals for several Petabytes of 3G data bandwidth with the carriers. Thus giving away 100MB of bandwidth per unlocked Android user per month, would most likely cost a lot less than $1 per month to Google, thus that would be something Google should be able to give to unlocked Android users for free. But even if carriers would charge Google as much as $10 per GB for 3G data bandwidth, I believe that my speculation on the Google SIM card could still make a lot of sense.

Because Google would negociate for 3G data bandwidth with all carriers in every country. I believe that it should be possible for users to seamlessly and freely roam for data usage in other countries. That is, as long as they do use a Google SIM card for unlocked Android phones. 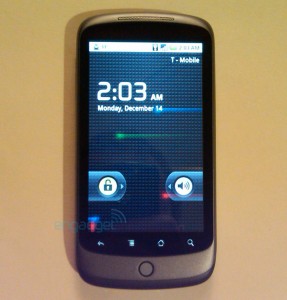 The Google Phone, guessing on the price and a possible picture
The blogosphere reports my Nexus One pricing speculation as rumor