The Google Phone, guessing on the price and a possible picture

This may be a picture of the Google Phone: 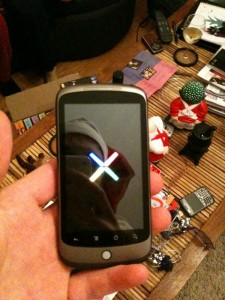 From rumors on Techcrunch, this may be a pre-paid only $100 device, for WiFi and pre-paid 3G Voice over IP usage such as on Google Voice. Exactly the revolutionary business model that I have been talking about for a while. My guess on the Google Phone price, or what I think it should cost is following:

All should come based on ARM Cortex A8 processors, probably OLED capacitative on Nexus One and LCD resistive on the Nexus XL. My suggestion is basically that the Nexus XL may be similar to my favorite consumer electronics device the Archos 5 Internet Tablet which I talk about in countless videos: http://armdevices.net/?s=archos and on my other site: http://archosfans.com

The most important factor here would be if the rumors are true and if my guessing is right, that the Google Phone and Tablet will be the first pre-paid Android phone and tablet. Affordable, my guessing also may even make it so that Google may not only sell it through all retailers like Amazon, Best Buy, Wal Mart, Media Markt, Aldi and such, but that one may even be able to buy it on google's own website and based on how active one has been on Google over the past few years, Google may even subsidize the purchase price of the phone or tablet. That is, cause Google can know it will more likely make more money on mobile ads from users who use Google services a lot. This way, look forward to Google Phone at $50, Google Tablet for $100 and even the Google Laptop/Tablet/E-reader at $150.

Some times, I think that it does take a big giant technology company like Google to really invest not only in the platform, not only in software, but also dedicate teams of hardware engineers into actually releasing own branded hardware on the market and push the boundaries in terms of business models to apply to the distribution of such technology. To push things forward faster, Google needs to make hardware.

One thought on “The Google Phone, guessing on the price and a possible picture”