Look forward to my CeBIT 2011 video coverage this week

Starting tomorrow, I will be posting here upwards 50 videos of the best ARM powered devices to be shown at this CeBIT Hannover Germany, one of the worlds biggest consumer electronics trade shows. This is my 8th consecutive CeBIT doing video-blogging. Yup, I started video-blogging from consumer electronics trade shows at CeBIT 2004 (you can see my CeBIT video archive for 2004-2009 at techvideoblog.com). If you have any tips you can write them here in the comments, click on Submit News at any time, or send them to my email charbax@gmail.com

Here are some of the topics that I expect to find at this show:

1. Chrome OS devices, does Google find it appropriate to let the laptop and desktop makers start to display ARM Powered Chrome OS laptops and similar devices? Recently it has been leaked that the ARM cortex-A8 i.MX51/53 Powered Acer DXH241 monitor will come with built-in Chrome OS, letting all monitor makers add Chrome OS for below $50 in ARM Powered component costs. Though it is also likely that Google may want to delay Chrome OS devices release a few more months and do some kind of big Chrome OS device unveiling at some other event.

2. Is it time for the International ARM Powered Google TV unveiling yet? Samsung usually has gigantic booths at CeBIT, will they show their Exynos ARM Cortex-A9 Powered Google TV there already? Because of the international media rights issues, and Google's issues with getting TV rights within the US market even, it may be Google waits for Google I/O in May or so to unveil more on that.

3. Anyone to launch Honeycomb, Chrome OS and Ubuntu compliant ARM Powered laptops, as nice or nicer even as the Toshiba AC100 (which recently got the Froyo upgrade)? Tegra2 is getting very popular, and other Cortex-A9 platforms are ramping up traction, as all major laptop makers have big booths at CeBIT, I will be looking for them showing off ARM Powered laptops.

4. More and better Android tablets. I will be bringing you videos on all the best new Android tablets, including filming the news from the Archos booth where I think that they will show more than the Arnova 10 and Arnova 8 that I just recently filmed.

5. I'm hopeful Panasonic will unveil a new compact HD camcorder to be the equivalent to a Sanyo HD3000 with better optics, better compression, WiFi/Bluetooth features and more, because I'd like to upgrade my camcorder to something like that. Panasonic recently unveiled camcorder designs similar to the Sanyo Xacti.

Here's one of the cheapest Realtek based 1080p media streamer boxes. It could even play Youtube in HD over its Ethernet connection if only Google would licence that out to set-top-box makers. The representative of Zinwell is saying that Google recently changed their policy for licencing of Youtube access to set-top-boxes by charging a huge $1 Million licencing fee just to be allowed to access the Youtube API to stream the videos. Zinwell says Flash 10 support might be added already by next month, which may be a workaround to support Youtube without having to pay the Youtube API licencing fee. I bought this device for 80€ and will post a video review of it here at http://armdevices.net soon.

Asus is releasing their third generation of HD video players in the O!Play HD2, it plays all video formats, comes with a USB 3.0 connector, eSata, HDMI output and even in theory could play back Youtube in HD from its Ethernet connection if Google would authorize set-top-box makers to connect with the Youtube video API.

I am on the Meetmobility podcast episode 45

You can hear me featured on the Meetmobility podcast episode 45 with JKKmobile, Sasha Pallenberg and Steve Paine available at http://meetmobility.com/2010/03/12/meetmobility-podcast-45-cream-of-the-expo-cebit-2010-roundup/

I talk about the Archos 7 Home Tablet, Gigabyte's Android-based e-ink e-reader, Android on set-top-boxes as well as my 10" Firstview VIA ARM powered Android laptop which I will post a video-review of here one of these next few days.

Motorola HS1001 is being released at CeBIT 2010, it features a very customized version of Android 1.6 running on its 2.8" QVGA touch screen display. This cordless phone will be sold for 99€ in Europe and $149 in the USA. It supports 2h of cordless phone calling on the battery, comes with a MicroSD card reader. 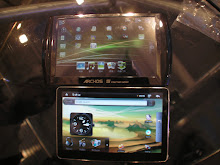 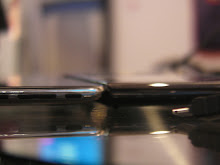 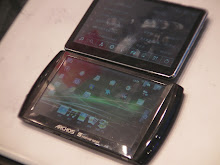 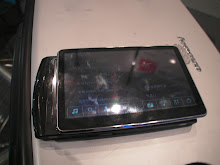 When I checked the Hivision stand on the 2nd of March, they told me someone had stolen several of their devices including their 7" Android tablet. Luckilly, JKKmobile.com went by their booth the day before the official opening of the trade show to film this video:

New Mio Moov with capacitive multi-touch 3G ARM11 Tegra1 powered GPS navigation device, with a keyboard connected to the leather case, with an interface built on top of Windows CE.