Super AMOLED is spectacular, that's for sure. Blacks are incredibly black and vivid colors and brightness is super. The Super AMOLED is officially 20% birghter and reflects 80% less light than the first generation AMOLED screens, it removes some kind of layer that was covering the screen so devices can be thinner and the angle of vision is incredible.

Yet, my question is how much more does Super AMOLED cost compared to LCD, especially at sizes larger than 4" in diagonal. I guess this is a matter of Samsung having invested huge amounts of billions of dollars into developing the AMOLED technology, that they have to try to mass manufacture those screens in quantities of millions for them to get down in cost. I wonder though, what is the difference in cost between AMOLED and LCD in those screen sizes? Anyone who knows the bill of material, please post in the comments.

I probably don't really like Samsung's attempt at making a different UI layer on top of Android which they call "S Life UI". With the bit that I played with it on the Samsung Beam, I would probably prefer to disable that and somehow enable a normal standard Google Experience user interface.

This video was released at: IntoMobile.com

Liquavista is demonstrating a new type of screen technology which could provide very low power black and white and color screens based on the LCD manufacturing process, though where the screen refresh rates can be automatically turned down below 1hz. Together with Pixel Qi http://armdevices.net/2010/01/08/charbax-tests-pixel-qi-at-ces-2010/ or as an alternative, this type of LCD screen technology will enable all Tablets and Laptops to also become full e-readers and could in theory have 50-100 hours battery runtime or longer.

Aiptek is showing probably one of the cheapest 3D camcorders on the market so far. It films 3D at VGA resolution, to then watch on any TV using polarized auto-shutter 3D glasses (or however they are called).

A new reflective display technology by Qualcomm, filmed by newgadgets.de:

Imagine walking around with a head-mounted 15" display to view informations available to you at all times. This system features a pretty cool six-axis position tracker from Hillcrest Labs that allows you to operate a cursor with nearly pixel-for-pixel accuracy by just moving around your head when for example panning around a large image or a map. There is a highly targetted microphone that understands voice-commands where you can for example zoom in on maps or images, you can exit back to the programs menu, launch specific applications and open specific files.

Interview with a Samsung Super AMOLED representative at the Mobile World Congress 2010, explaining why Super AMOLED is better than first generation AMOLED by Samsung. Samsung is probably the first to mass manufacture AMOLED screens.

Steve Sperle, head of Consumer Segment Marketing at Freescale, shows us an overview of the product demonstrated at their Suite several new tablet, e-reader, laptops, smartbooks and interactive display implementations of their i.MX515 ARM based processor technology.

I am testing the latest production ready Pixel Qi screen outdoors by the Venetian Hotel in Las Vegas. It is the technology that will combine Laptops with Tablets and Ereaders.

Click on the images for the full sizes available at Picasa (please link back here if you use them): 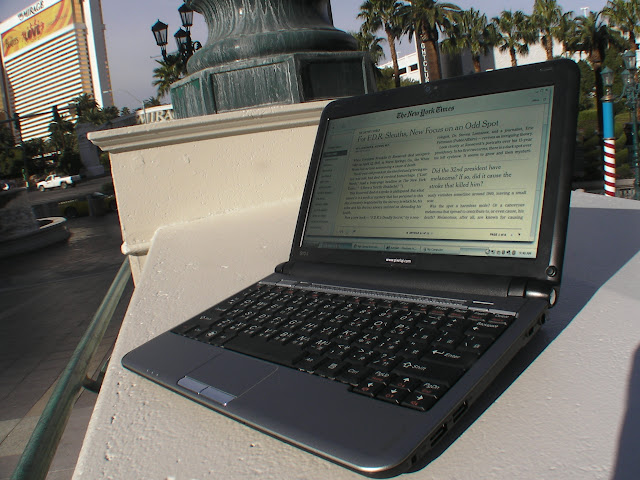 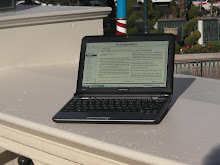 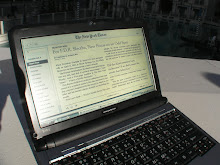 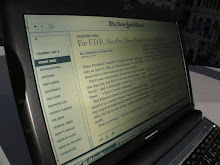