ARM is showing Motor Control comparing two rotating water vessels, one controlled in a conventional manner, the other is controlled in a more advanced algorithm called Field Oriented Control on a STM32 Cortex-M3 processor. This more advanced algorithm allows more efficient operation of the motor, better control of the torque and allows for quieter operation. The idea is to use less power to control motors. This is just the start of their investigation into Field Oriented Control using the Cortex-M3 processor.

This is how one can create a mega display wall, combining several displays. The mouse is synchronized accross 6 ARM Powered ubuntu desktops through synergy, and a ffmpeg synchronization app makes it possible to combine them into a video wall.

It is released now, available for $174 to developers at http://pandaboard.org deliveries starting at the end of this month.

The Freescale Tower systems are development kits providing for many of Freescale's sensors and processing features in a cube. The new Freescale Kinetis ARM Cortex-M4 processor and this Kinetis Tower System just started sampling now.

If you are an ARM Powered mobile computing app developer, if you want to prepare OS and apps for TI's upcoming ARM Cortex-A9 platform, shipping from around the end of November, you can pre-order the PandaBoard now for $174 at http://pandaboard.org.

ARM Cortex-A9 as in this OMAP4 may be the ARM Processor generation that we have been waiting for to realize full ARM Powered desktop performance in devices such as for Laptops, Desktops, set-top-boxes for HDTVs and other high resolution full desktop user experiences. So this new processor is not only about speeding up Smart Phones, it's also to start supporting higher resolution larger screen devices and provide ARM Powered full computing as credible challenger to x86. The OMAPvideo YouTube channel is releasing some videos to demonstrate PandaBoard's setup and performance, here is a video of Ubuntu 10.10 booting on this development board:

At mobile world congress, a TI spokesperson told me after I filmed my OMAP4 demonstrations video, that real-time video encode on OMAP4 is within 2% of x86 based multi-pass encoding. I wonder if that is really true, or if he meant within 2% only for real-time encoding.

Hopefully 1080p playback on OMAP4 is impeccable, so 1080p high profile at very high bitrates h264 and mkv works fine so Boxee type people can't complain like they complained on video playback performance on Tegra 2 so it isn't mysteriously replaced with Intel CE4100.

It's shipping to selected few developers starting this month. This is Texas Instrument's Dual-Core ARM Cortex-A9 OMAP4 development board, the successor of the ARM Cortex-A8 OMAP3 based BeagleBoard.org project, they are to launch the PandaBoard.org community now, for powerful embedded open source Linux development. Development of the kind of software that we could be seeing on upcoming ARM Powered laptops, tablets, set-top-boxes, desktop replacements and not only on smart phones! 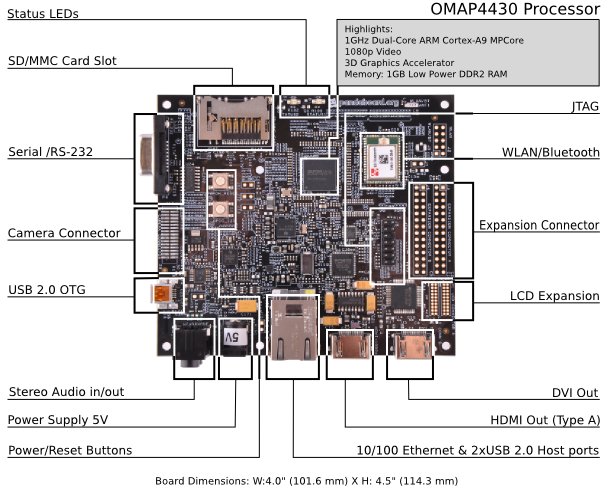 This type of development board could provide one the worlds fastest and smoothest Ubuntu and Chromium on ARM development platforms yet with high resolution 1080p output and a whole bunch of exciting stuff.

If you are a hard core ARM developer, you can apply on PandaBoard.org to get an early access to this development board.

Here's a pre mass production sample of the new 10" capacitive Android Tablet by Hard Kernel. Find more informations and specs at http://hardkernel.com. Check how nicely it outputs the Android user interfaces on the huge HDTV and can also be used for pretty advanced 3D games.

Hard Kernel already has a 3.5" gaming-oriented device which I filmed a couple of months ago (see here), now they are also announcing a 10" tablet device named ODROID-T.

Here are the full specs: