Shuttle is one of the major compact motherboard makers, they are now moving a lot of their ressources into making ARM Powered solutions, some may be branded by Shuttle, other might be ODM, based on ARM Processors by Texas Instruments, Nvidia and VIA Wondermedia.

Skytex is working on getting more performance in their low cost tablets, using Freescale's new 1.2Ghz i.MX53 with better video and graphics, the Telechips 8803 ARM Cortex-A8 and the new VIA Wondermedia ARM9 with a better DSP.

Here's another Android tablet presented by Eken at the China Sourcing Fair in Hong Kong. It runs a 600mhz VIA ARM Processor, USB-host, SD card slot, the 3G-module is optional.

The Hong Kong Electronics and Sourcing fairs and the China Consumer Electronics Fair were just held in Hong Kong and Shenzhen. I had tried for 3 weeks after CeBIT to find a sponsor to cover my flight and hotel costs so that I could go there and bring you 50 videos of all the new products that I expected to be shown there. But I did not succeed to convince any sponsor for going to film in Asia this time, so I am for now staying in Copenhagen where I am currently filming some interviews at the Cphpix Copenhagen Film Festival: 1, 2, 3.

I've then been trying to find other sites covering those trade fairs with video, pictures and infos, but I have not found much thus far. Google News has some things about CCEF and about HKTDC in Chinese, clonedinchina.com has a few posts showing such things as a new Rockhip powered Android phone, SmartDevices R7, Onda VX560 7-inch PMP, Kinstone Windows CE MID, Huawei C8600 Android phone, MDO Avatar G580 Android phone, lots of cheaper ipad-like tablets.

I don't know for sure how much innovation and new products were shown by the Chinese manufacturers at these Trade Shows these past few days. I didn't yet spend enough time translating all the Chinese blogs and searching more for those most interesting Android tablets, new cheaper Android phones, new interesting e-readers, ARM Powered Laptops and more.

I guess also that this year's CCEF, HKTDC and HK Spring Sourcing fairs may not have been too popular among those European and US based bloggers that I know. Maybe they don't go there for a reason.

Anyways, I will try to bring you exclusive videos of a bunch of awesome ARM Powered products that I have right here to review, I've got a $95 10" Android VIA-ARM Powered laptop (watch me showing a brief preview of it in the video below), I've got an Intelligent Mobile Hotspot Mifi adapter by Novatel Wireless, I've got the touch-screen PocketBook 302 with WiFi/Bluetooth and I've also got a Bluetooth wireless foldable keyboard by Chinfai Leicke. I'll post extensive video reviews of those and more as soon as I find the time.

This video was posted at: netbooknews.com

This is a 45min Documentary film Directed by Chiara Sambuchi, produced by ZDF/Arte released by Lavafilm, just aired on the Arte TV channel in France and Germany. I have seen most of the OLPC related videos and documentary films during these past 4 years that I have been updating my video-blog at http://olpc.tv, this may be one of the best, most awesome and most beautiful Documentary films on the OLPC project that has yet been made. 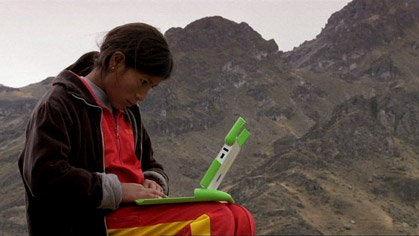 Firstview Electronic HK Limited is showing the PC706V which may be one of the worlds cheapest laptops, it runs Android on a low cost and low power VIA 8505 ARM based 533Mhz processor, with 128MB RAM, 2GB Nand flash, 7" 800x480 screen, WiFi, SD card reader Nand flash, 7" 800x480 screen, WiFi, SD card reader 3G dongle support. It's supposed to run 4 hours on a 2100mah battery, it loads websites slower than a more expensive computer, but it can be made for only $65 in the Chinese factories when ordered by big resellers in large quantities.

Via Technologies at CES 2010

Via Technologies is powering the OLPC One Laptop Per Child XO 1.5 with a Via C7 1ghz processor on the VX855 chipset that can support up to 1080p video playback and other much more powerful things which also can help OLPC lower the price more quickly in terms of supporting the most up to date components of the industry that lower in price constantly. Via also has an ARM licence and is doing all kinds of things with that.

This is a video-interview with Walter Bender of Sugar Labs at Netbook World Summit in Paris. Sugar is the Gnu/Linux based OS running in over 1.5 million OLPC XO-1 laptops used by Children around the world. It is the Linux distribution that popularized Linux on Laptop form factors. As I wrote in http://www.olpcnews.com/commentary/impact/olpc_netbook_impact_on_laptop.html the OLPC project has greatly influenced the whole PC/Laptop industry, and with more optimized and streamlined Linux implementations like this new Sugar Linux OS, the influence is only going to be even greater.