So this is the first 4.8" capacitive Android tablet, to be released at $500 or more (with unlocked 3G) according to rumors. Dell has been working on this for a while as Michael Dell first showed it to Techcrunch at Davos in January.

Based on Qualcomm's Brew OS, this is a very basic phone for use on wireless networks in developing countries, where copper networks aren't available but where the 2G and 3G networks already are. This Brew OS is basic and fast even on this MSM7227 based device. It offer Opera Mobile browser, some basic games and a few other basic apps.

You may have seen my previous videos of the HP Compaq Airlife 100 as I filmed it at consumer electronics trade shows these past few months at CES and at Mobile World Congress.

Carrypad.com has got one from HP Spain and have posted this video review. 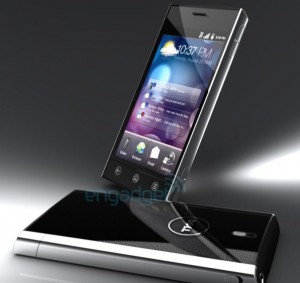 Here's another new Android phone announced (or leaked) by Dell, to use the Qualcomm MSM7230 800mhz processor, 14.4Mbps download and 5.6Mbps upload HSPA, 512MB RAM, TV-out, Bluetooth 3.0 in this "curved glass" design. Dell is designing some kind of "Stage UI", similar to HTC's own Sense UI for their customized Android home screen and user interfaces. 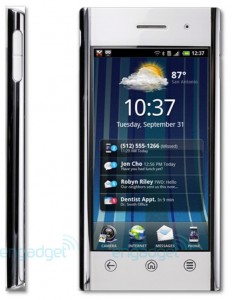 Here's a design for an Android phone by Dell to be released next year, it will be based on the next generation Qualcomm MSM7230 processor, come with a 2.8" QVGA screen, 14.4Mbps HSPA and is said that it will be sold for cheap. 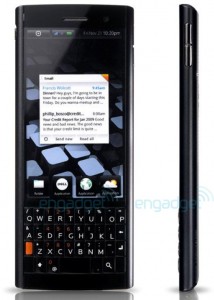 About 6 months after Sharp's introduction of the Freescale i.MX51 powered PC-Z1 running Ubuntu on the Japanese market, Sharp is now announcing this Qualcomm Snapdragon powered 3G-enabled Android powered device to be released in June to the Japanese market.

Watch also an augmented reality application runing on the Sharp IS01 in this other video interview with a Sharp representative: http://www.youtube.com/watch?v=GHXv8ob7jNQ

A developer version called JN-DK01 will be available in Japan starting in May.

I filmed the Windows Mobile based HTC HD2 last month at the Mobile World Congress:
http://armdevices.net/2010/02/17/htc-hd2-at-mobile-world-congress-2010/
And at the HTC booth at asked the HTC representative if there would be a 4.3" LCD screen based Android phone as well, I didn't get an answer on that at that point:
http://armdevices.net/2010/03/01/htc-desire-htc-legend-and-htc-hd2-mini-at-mobile-world-congress-2010/

The HTC Supersonic is basically the same hardware as the HTC HD2, but this time it runs Android, comes perhaps with slight hardware changes such as a slightly larger battery (people might have been complaining about battery runtime on the HD2), it has a HDMI output when using an adaptor for that, 720p video recording and the 1ghz Qualcomm Snapdragon processor.

Very interestingly, this is the first WiMax phone released by Sprint in the USA. That requires a whole new Mobile WiMax network and only some carriers are deploying that in some places. Though I have been covering WiMax for years such as in these interviews that I filmed at CeBIT 2006:
http://techvideoblog.com/cebit/wimax-forum/
http://techvideoblog.com/cebit/runcom/

So perhaps now finally some things may be happening on the Mobile WiMax front. My question is still, how much better is WiMax in terms of bandwidth capacity per user, bandwidth capacity with many mobile users. What is the performance of Mobile WiMax compared to 700mhz unlicenced wireless mobile networking over White Spaces or how does it compare with 3G HSDPA and LTE technology?

This video was released at: slashgear.com