Uses a 10.1" resistive screen, can be manufactured for below $199 using the Marvell 166 processor. Marvell is working on user interface layers on top of Android suitable for Tablets to be used in education leading the way towards the OLPC XO-3 Tablet to be based on the faster Armada 610 processor.

Pixel Qi and CPT are preparing 3 different screen sizes to be mass manufactured in 2011, including a 7" 1024x600 design that will be shown early January at CES in Las Vegas.

This alliance started early last summer when CPT showed a transflective screen of its own design at a Taiwanese trade show. Discussions between the two companies at that show made it apparent that Pixel Qi and CPT should work together to bring stronger product to market faster. A close alliance was formed and the teams have been working together quietly all fall. They have created samples of a 7” 1024×600 screens scheduled for mass production in early Q2 2011, which will be first publically shown at the CES 2011 exhibition in Las Vegas in early January 2011. This represents an expansion of Pixel Qi’s manufacturing strength beyond its first LCD manufacturing partner who has been shipping Pixel Qi’s 10” screen.

These dual-mode reflective and transflective LCD screens are crucial to realize the combination of Tablet and E-reader into one product. Without this type of screen, I don't believe tablets can be used for reading books as backlights are not meant for reading, and for e-readers to use LCD also makes them more versatile thus also including all the tablet functions into one same product. Most importantly, this screen technology improves battery runtime for ARM Powered devices considerably, as in a 10" ARM Powered tablet or laptop, the backlight probably consumes about 80% of the devices overall power, consider thus a screen that can work without a backlight or with a lower backlight intensity, and you have a battery runtime multiplied by as much as 5x in that same product. Thus an ARM Powered Tablet or Laptop that had 10 hours battery runtime on a regular backlit LCD may have up to 50 hours using this type of screen. Thus also making this screen absolutely crucial for projects like OLPC and the Indian education $35 tablet project if they want to make it viable that these devices can be used places where there isn't a lot of power.

Marvell shows the Armada 100 and Armada 600, explains the differences in price, performance, target markets. Also shows off the Marvell 168 powered Gplug D, the first Guruplug with a HDMI output. The big question I have is which platform will OLPC choose to use for the OLPC XO-3 tablet platform, if it will be one of these or if the timing allows for the even newer and more powerful Marvell Armada 628 Tri-Core processor to be used.

OLPC is working to design an unbreakable screen and thus may not have the XO-3 prototypes ready to show at CES in January. Marvell and its partners will likely have lots of tablets to show by then though. An unbreakable and sunlight readable Pixel Qi screen is an important feature of the XO-3 to make it a viable option for developing countries, as well as its abilities to be used for full productivity and for fast text input.

OLPC to turn tablets into productive tools for learning with Marvell’s $5.6 Million grant

Marvell has supported OLPC since the beginning, they have thus far provided the WiFi Meshing modules on XO-1 and XO-1.5. Marvell co-invested with Google, News Corp, Novell and the others into the founding of OLPC to bring about the XO-1 which forced Intel and the whole laptop industry to respond with the 100 Million netbooks that have been sold in the last 3 years to limit the effects of OLPC's potential disruption of the laptop market. Marvell and OLPC have now signed an agreement in which OLPC is to develop XO-3 Tablet(s) based on one of Marvell's ARM System On Chip processor solutions.

Marvell can justify the investment as an R&D investment in which everything OLPC develops, as all OLPC hardware designs are open source, can freely be used by Marvell's manufacturing OEM partners to also release commercial tablet products based on these technologies.

OLPC will use these funds to develop the Tablet that can be used for productivity, for constructionist learning as Nicholas Negroponte said at the Mobilize 2010 conference last week:

How do you make tablets a constructionist medium? A medium where you make things, you don't just consume them. Cause if it's about kids and learning, it's not like you feed a goose grain to make the foie gras. You have to make it for kids to use it, to make, to communicate. Whether it's music, whether it's text or whether it's to write computer programs. And it has to be so low power, when it runs out of power you just shake it a little bit and it continues.

These are the challenges that OLPC will work on to implement in XO-3 before the target 2012 $75 release: 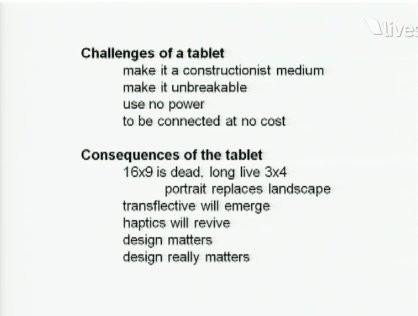 Why should children use tablets instead of laptops?

The future of OLPC: it's a notepad.

The notepad is the oldest tool used by children in the class room. Imagine adding full online and offline interactivity to the notepad. Imagine a magic notepad that can display every page from every book, every image and every video ever filmed. To display low bitrate tutorial videos that work even in black and white mode like the ones of the Khan Academy, even have them be interactive and provided as learning games. The student can annotate all books, take notes and share them. The tablet is not only lighter and could be designed for cheaper, it also is the more usable form factor as an e-reader for reading all books ever written in the world. As Nicholas Negroponte says:

There is no way to justify a paper book. If you'd want to send 10 thousand physical books, you'd have to take every 747 out of service around the planet just to move them from wherever they are being manufactured. Physical books are a luxury.

I wonder if 7″ or 10.1″ Pixel Qi will be used, or both. The 7" size may be optimal for it to be as light, cheap and durable as possible, it might be better for children to read books on a 7" form factor than a 10.1" one. For productivity, I think it should support both touch screen and some cheap $2 USB keyboards/mouse and use its built-in kick-stand. Children can easily carry a $2 keyboard/mouse when they need to be most productive. Maybe a thin keyboard to double as screen protector and which can be clipped onto the back of the device when in tablet/e-reader mode could be a nice design feature, although the screen needs to be unbreakable enough for children not to need worry about carrying the tablet without a screen protector.

Marvell is giving $5.6 Million to OLPC to fund the development of the XO-3 Tablet, with bendable plastic Pixel Qi screen and education-centric customized software, that finalized XO-3 will be ready by 2012 for distribution to schools at a target $75 bill of materials and manufacturing each. OLPC and Marvell will have an early demonstration tablet prototype running Android to show in January at the next CES.

I think that they should definitely go for customizing Android for education. Maybe add Sugar apps support on top of Android OS as a second app platform. I wonder if 7" or 10.1" Pixel Qi will be used, or both. For productivity, I think it should support both touch screen and some cheap $2 USB keyboards/mouse and a kick-stand.

Nicholas Negroponte keynote at the Mobilize conference: Give Every Child a Tablet

OLPC's founder Nicholas Negroponte discusses educational use of the tablet form factor followed by a discussion with Marvell's co-founder Weili Dai. They are building the $75 XO-3 Tablet for education, to be showcased as prototype within 3 months by next CES. Possibly that the first prototypes may even get to be using the latest wide-view capacitive Pixel Qi LCD screens and the Marvell Armada 628 processor.

To be productive using a tablet, I think plugging a $2 USB keyboard and mouse could still be the best solution. As text entry can hardly be as fast on a tablet, even using haptic feedback or web based voice recognition technology. If the USB keyboard/mouse can be developed to cost $2-3 maximum, then I think it would make sense to provide each child with the $75 tablet and the $2-3 keyboard/mouse combo as well as some kind of cheap bag that holds them together or perhaps even better, the keyboard/touchpad could double as a thin, cheap and light screen protector for the tablet when carrying it around and could as well be clipped onto the back of the tablet when only using the tablet mode.

Filmed at the Mobilize conference organized by gigaom: http://gigaom.com/2010/09/30/mobilize-2010-negroponte-sees-tablets-as-creative-tool/

Marvell is unveiling this amazing new processor for smart phones and tablets, the Marvell Armada 628 has:

The new ARMADA 628 tri-core processor incorporates a number of advanced processing and power management features. The tri-core design integrates two high performance symmetric multiprocessing cores and a third core optimized for ultra low-power. The third core is designed to support routine user tasks and acts as a system management processor to monitor and dynamically scale power and performance. The tri-core architecture provides superior performance and lower power over dual-core designs while maintaining industry compatibility and leadership — ensuring a richer, faster and smoother experience than any other ARM-based processor available today.

That sounds like Marvell is awesomely at work using its ARM Architecture licence, customizing their processors as much as they can to design those processors how they think is best with their expertise and 5000 employees.

The ARMADA 628 is also designed to be the first mobile CPU to provide high-speed USB 3.0 connectivity, which offers 10x faster performance than USB 2.0.

Hmm nice, I can't wait to be able to transfer those terrabytes of data from one hard drive to the other faster that tens of hours.

I am really looking forward to see some devices using this new processor.

Perhaps now this new Marvell 528 processor generation (as I expect could be the numbering of the Desktop/Laptop derivative of the 628) will be fast enough as well to power Desktop and Notebook class devices like these ones I filmed:
http://armdevices.net/2010/01/18/marvell-slim-desktop-solution-ebox-based-on-the-marvell-armada-510-processor/
http://armdevices.net/2010/01/06/marvell-armada-510-based-12-1-arm-powered-laptop/

Will Marvell use 628 in the upcoming OLPC XO-3 low cost low power tablet for education project?

Uruguay has already given one laptop to every child between 6-12 years old. Now they want to give laptops to older students too from 12-15 years old. For this, OLPC has installed a keyboard that is more suitable for older kids:

Remember that OLPC is full at work on OLPC XO-1.75 which is a Marvell Armada powered OLPC laptop, which may also get a 8.9" touch screen. And that OLPC is also full at work with Marvell to release the XO-3 tablet design by next CES.

As you can see with the hundreds of videos at my other video-blog http://olpc.tv, OLPC is a huge success wherever it is implemented. The ARM based versions that are coming, hopefully also using the newest version of the Pixel Qi screens, should allow for a significant lowering of the manufacturing prices and a much lower power consumption.

Source of this video: olpcnews.com

I predicted it in my article on 18th March, Marvell's Moby Tablet announcement is the beginning of the new OLPC XO-3 project.

This is great news! It means XO-3 is coming earlier than 2012 as originally planned. It'll basically start coming as soon as the next generation Marvell Armada 61X processor is ready. Check my video of Marvell Armada 610 and my video of the Marvell Armada 618 to have an idea how impressive this processor is. This means that prototypes of XO-3 could be showcased today and I'm guessing mass manufacturing can start before the end of year.

This also means the 5000+ people at Marvell are now working towards reaching the goals of the OLPC project. Cheaper access to learning, information, web, online entertainment, e-books, worldwide communications, all this is great!