It monitors your body 24 hours a day, you strap it to your upper arm, it's not too heavy but could probably be lighter (I think they should make it a light and compact wrist watch). It has 3 axis accelerometer monitoring all movements, it measures sweat, it's a pedometer, heart rate and body heat monitoring and based on your height and weight it can calculate calorie output/usage with 90% accuracy (so they say) using clynically approved methods. It's available on Amazon.com

Rockchip RK29xx based 10.1" capacitive Android 2.3 Gingerbread tablet. It may cost something like $199 at retail, price is to be confirmed by Archos once this product is ready to be released. Release depends approximately on Rockchip being able to mass manufacture and deliver their new RK2918 ARM Cortex-A8 high performance yet affordable processor.

I'm not really supposed to try to film this, but here it is. I try to click around in this pre-release Honeycomb Motorola Xoom tablet pre-production prototype instead of only letting it play the animated prepared UI videos from the gallery. Google is doing some awesome work in making software optimized for tablets. Like Archos has been doing it, they decided there's no need for hardware Android buttons on Tablets. Other aspects of this UI suggests UI design that's really being designed for high resolution touch screen devices.

Expectations for CES next week

Between January 3rd and 11th, I am going to video-blog from CES 2011, make sure to often refresh my RSS feed and/or subscribe to my YouTube channel, (at last year's CES I published 75 videos), I'll try to feature the coolest ARM Powered devices that I can find at the show.

Have you got any scoop or ideas for what I should video-blog at CES? What questions would you like me to ask the representatives of which specific companies? If you read on any other blogs about any interesting products showing at this CES, please post your suggestions for what I should film here in the comments of this post. You can also send me an email: charbax@gmail.com or you can even sms/call me or leave a voicemail between January 3rd and 11th at my US phone number +1 (702) 238 8630 (only active when I am in the USA).

Here are some of the things I am expecting or hoping to video-blog at CES:

- Lots of Froyo, Gingerbread and Honeycomb stuff. Android in everything!

- Several dual-core tablets are rumored. Nvidia's Tegra2 is rumored could be one of the stars of the show, rumored to be the "reference design" for Honeycomb. Sounds great, but I am also looking forward to all the other upcoming Dual-Core ARM Processor platforms and I am wondering if products featuring these will be shown at this CES already.

- How soon are the Dual-Core smart phones and tablets being released and at what prices? Will LG, Samsung, Motorola or other present phones at CES to beat Nexus S already?

- ARM Powered Chrome OS Laptops and Google TV Set-top-boxes, I will be looking for the first clues of these products.

- Tablets, more tablets? Any new design features to allow tablets to be used more for productivity? Are some Honeycomb designs like Archos without the hardware Android buttons? Designs with foldable/swivel keyboards?

- Pixel Qi 7", 10.1", big OEM announcements? Hopefully these LCD screens will be ready for Kindle-LCD, ipad2, samsung galaxy tab2 and more hopefully mass manufactured and everywhere within the next 3 months.

- Texas Instruments next generation nHD pico projector in all kinds of phones, tablets and other devices at CES? Or not to be shown before February at Mobil World Congress? I'd like to see this type of pico projector be used together with sensors to detect when touching in user interfaces projected for example on a table (see my video of a table-pico-projector prototype UI demonstrated at CeBIT 2007), this could turn any ARM Powered device, even pocketable, into a large screen computing device.

- Are the new ARM Processors capable of full 1080p at up to 60fps with full high profile and full high bitrates of every codecs?

- Nintendo 3DS is coming in February/March, any other manufacturers to mass manufacture products to use that parallax barrier 3D screen from Sharp that doesn't require 3D glasses?

- Are ARM Powered NAS boxes and Pogoplugs/Sheevaplugs going to be powerful enough to download and seed BitTorrents at full speed, allow for full speed gigabit LAN file sharing even on the cheaper solutions?

- How much is going to be LTE, how soon and are anyone showing anything to do with White Spaces yet? How soon could that be deployed and at which cost and with what range and authentication features?

- I'd like to see Sanyo release a HD3000 with WiFi/Bluetooth and optics and sensors closer to that of a DSLR. Or it will be interesting to see more DSLR type optics and sensors in more video camcorders and see how affordable those setups can become. It seems Sony, Panasonic and all other major camera makers are going in that direction for the next generation of best HD camcorders.

Please post your expecations/hopes in the comments or send me an email!

Rockchip released their next generation of ARM9 based processor RK2818 and are teasing their next generation ARM Cortex-A8 RK29 to be shown by CES. RK2818 can be made with up to 1ghz frequency, supports more and faster RAM memory, comes with a fast DSP and GPU core to accelerate graphics and user interfaces. This new Rockchip processor makes it possible to run up to Android 2.1 on cheaper tablets such as the new $149 (possibly $179 with margins) capacitive Archos 7 Home Tablet v2, and have them perform better for web browsing than their previous generation ARM9 RK2808 processor, video playback and other things are also improved. Rockchip's next gen RK29, to be showcased at CES, they say is ARM Cortex-A8 better than Apple A4, with 1080p encode/decode, 30 million triangles.

Not in the benchmark, Droid X, Droid 2 and the Archos Gen8 Tablets have SGX535.

It will be interesting to see what will happen once possibly more competition comes with ARM Mali-400 in the upcoming ARM Cortex-A9 dual-core processors and where its performance might be. Also I'd like to know what kind of performance Tegra 2 does for this 3D stuff. What Qualcomm Adreno 220 is cooking for its upcoming dual-core Snapdragons. And what 3D on-die GPU Marvell is going to use (supposedly does 200 million triangles per second) in its upcoming 628 Tri-core processor. 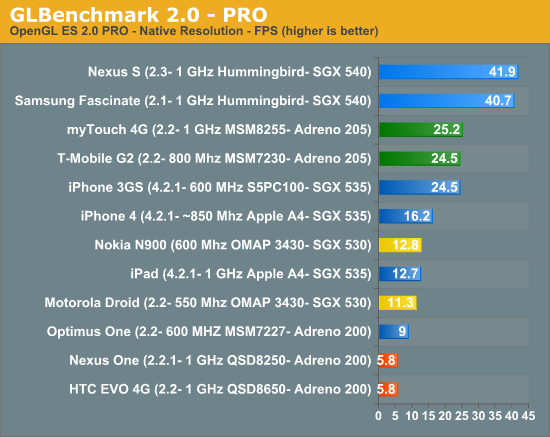 A few days ago, I visited Leo Laporte's Twit Cottage to bring him some Archos tablets (featured thus far in This Week In Google 69 and MacBreak Weekly 221) and I filmed these few seconds back stage as they were finishing the recording of the quite funny This Week In Tech episode 274. This has got to be one of the most advanced, most successful and most famous live and on-demand video podcasting studios in the world at the moment. They are expanding the Twit Network and moving into even larger studios soon.

As I told you in yesterday's MacBreak weekly 221 post, last Sunday as I was in the Silicon Valley to video blog the ARM Technology Conference for my http://ARMdevices.net site, I had fun traveling up to Petaluma and bring Leo Laporte some of the Archos Gen8 tablets (70, 43 and 32) so he could test them out and let his Twit gang also play with them. So that they could compare those with Apple and Samsung tablets. The time code in this "This Week In Google" episode 69 where they start talking about Archos is around the 5th minute.

You can discuss this video in the forum: http://forum.archosfans.com/viewtopic.php?f=63&t=40903

I want a Bluetooth remote on my watch for my tablets, yes 50€ Sony Ericsson LiveView is here 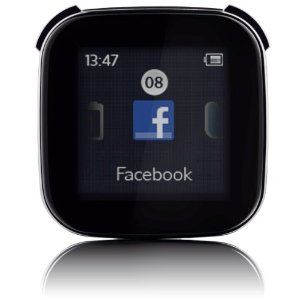 It's out now on Amazon.de for 50€, I want something like this. This could be perfect with my Archos 70 Internet Tablet and my $48 Sony DR-BT100CX Bluetooth Stereo Headset. The idea is to answer VOIP calls on the wrist watch and use the Bluetooth headset without having to take out the Android Tablet from the pocket.

Before interviewing me on my interests in ARM Devices, EETimes editors Brian Fuller and Patrick Mannion went ahead and opened up the Archos 7 Home Tablet in front of a large audience of about 100 people at the ARM Techcon 2010 exhibitor area theater stage. They talked about the features of some of the processors that are used.