The flip camera type of product is a growing trend, a lot of consumers want these compact pocket camcorders. 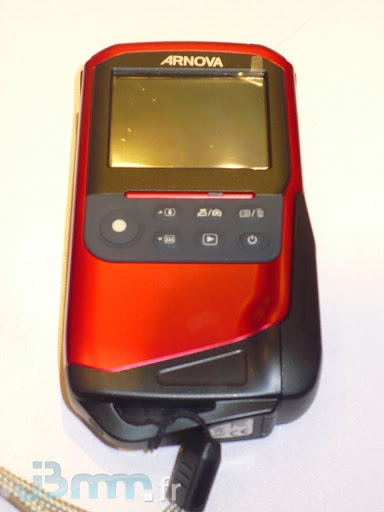 Thanks BenMars for your reports from the Hong Kong Sourcing fair!

Another cheap web radio player with speakers, also supports Web TV channels. Those are trendy as well for the kitchen or the bedroom, probably also works as an alarm clock. Probably cheap as well. 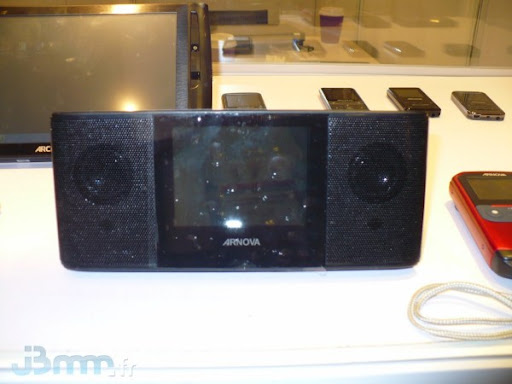 Thanks BenMars for your reports from the Hong Kong Sourcing fair!

First unboxing and review of the Archos 70 Internet Tablet, a $275 alternative to the $499 iPad and the $599 Samsung Galaxy Tab. I was amazed by how thin and light it is when I first took it out of the box, at 300 grams, it nearly feels like it's an empty case without any electronics inside. 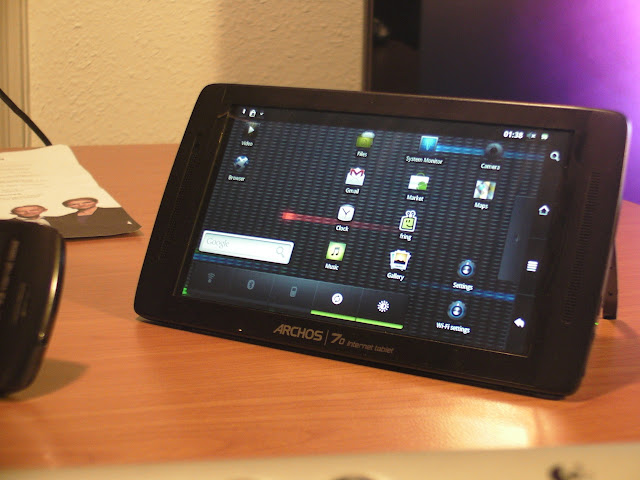 The capacitive touch screen on an Archos tablet is cool, I need to get used to that. Hopefully I will learn to type on it as fast as I do with my finger-tips/nails on my resistive screens. My plan this winter is to carry this 7" Archos Android tablet with me everywhere in the inside of my jacket pocket. In this video, I try to show you multi-touch, web browsing speed, email, facebook, Google Maps Street View, Live wallpapers, video playback, HDMI output and more.

This review model is still running Android 2.1, while Archos is putting finishing touches to their faster and more optimized Android 2.2 firmware, hopefully to be ready in like days or so for when this device and its 101 big-brother actually ships worldwide. As I showed you in my previous video, Google Marketplace works on these Archos Android tablets using the gApps4Archos.apk one-click installation file. All codecs up to H264 high profile high bitrate 720p MKV works even on HDMI output (still to be tested and optimized in firmware). It's only 300 grams (vs 380 grams Galaxy Tab and 680 grams iPad). 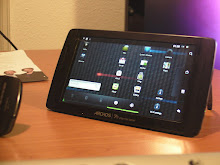 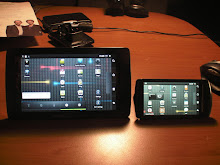 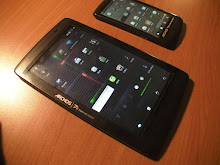 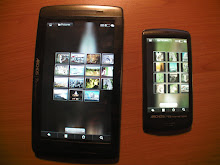 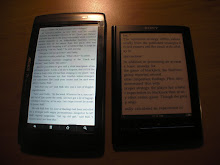 You can discuss this video in the forum: http://forum.archosfans.com/viewtopic.php?f=63&t=38513

The full Google Marketplace with Gmail, Google Maps now works on Archos new range of Android Internet Tablets, it has been made available as a one-click installation file with the name "gApps4Archos.apk" in the ArchosFans forum by a forum user. In this video of the Archos 43 Internet Tablet, I also feature demonstrations of Skype (these Android tablets can be a perfect as cheap VOIP devices!), Bluetooth speakers, 720p MKV high bitrate video playback with DTS audio and a couple of action packed 3D games on the HDMI output.

Here's a reminder of the new Archos Android Tablets that this Google Marketplace gApps4Archos.apk installation file works with:

In this video, I try to show you the quality and to demonstrate the value of the Archos 32 Internet Tablet with Android. It's the 3.2" $149 8GB big brother of Archos 28 Internet Tablet which is to be sold below $99 with 4GB of storage and a slightly smaller 2.8" screen, of about the same size as the HTC Tatoo, Sony Ericsson X10 Mini, Acer beTouch 110/120/130. This video shows how the experience is on such WQVGA resolution small screen Android device.

What do you think about this Archos Android WiFi-connected PMP, at 2.3x cheaper than the iPod Touch? Don't you think it will be a no brainer for mass market consumers, if given the choice in stores, that they will choose this type of Android alternative to the iPod Touch?

An overview of the difference in screen size, touch screen quality, web browsing speed. More on video playback support including a test on streaming video over Samba file sharing.

It packs everything you can think of into 130 grams, with 4.3″ highly responsive touch screen, $199 price point for 16GB, no monthly subscription fees required (makes it much cheaper but similar in performance to Droid X), it can access 3G on Mifi or using Bluetooth tethering. In this video I demonstrate awesome HDMI output to browse the Internet on your HDTV, to play amazing 3D video games using the accelerometer or perhaps using bluetooth gamepad controllers too, and of course, to playback HD quality videos.

My unboxing of Archos 43 and 32 Internet Tablets

This is my unboxing video of the Generation 8 Archos Android tablets:

Archos 43 Internet Tablet (16GB) for sale soon for $199 in the USA and 199€ in Europe. (yes A43 is confirmed to be $199/199€ for 16GB Capacity). The Archos 43 Internet Tablet basically offers the same Android experience on a large yet very pocketable 4.3" touch screen as on a Droid X using the same Texas Instruments OMAP3630 ARM Cortex A8 45nm 1ghz processor but for $199 all inclusive (no $599 unlocked pricing or $2000 with 2-year contracts), no monthly subscriptions required, though for 3G access and VOIP you need to use a Mifi or Bluetooth tethering. It comes with HDMI output and full video and audio codecs support up to MKV 720p high profile and high bitrate support (which I will test in my upcoming next videos).

Archos 32 Internet Tablet (8GB) for sale now on Amazon.com for $144 in the USA and 158€ on Amazon.de in Europe. This MiniTablet range by Archos offers basically a similar experience to the iPod Touch but for an amazing price starting at $99 for the Archos 28 to $149 for the Archos 32 which thus has slightly larger screen, a VGA camera and Composite tv-out.

In this video, I unbox them and boot them up for the first time:

Consider European prices include ~20% VAT taxes which is why the EU price of any consumer electronics devices is always higher than US prices which don't include taxes.

You can discuss this video in my other forum: http://forum.archosfans.com/viewtopic.php?f=63&t=37752 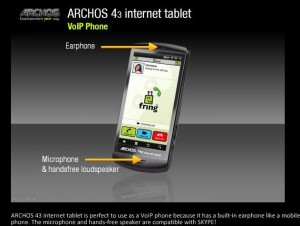 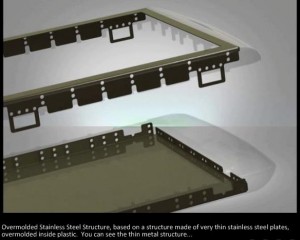 Pixel Qi is the single most revolutionary LCD screen technology, adding the benefits of low power, reflectivity, long form and outdoor readability all the while providing a switch on the side of the device to provide full color backlight mode to the screen as well. Thus combining Tablets with E-readers, making 50-hour tablet battery runtime without increasing battery size a possibility and bringing full color video, web browsing and full Android UIs to E-readers. The 10.1" screen will be announced soon for more products than just Notion Ink and Innoversal:

We will be announcing other products carrying Pixel Qi screens here in this blog; stay tuned.

Pixel Qi provides some insights into the reason why several tablet projects including the ones to use Pixel Qi have been delayed because of the success of the disruptive iPad:

Tight supply chain and 100% factory usage this spring and summer coupled with Apple’s disruptive iPad effectively had a 1-2 punch impact: delaying most tablet makers from coming to market as early as they wished. The situation has eased: the supply chain is more robust and factory capacity is widely available. Many of our device makers used this downtime to refine their designs with the result being even more exciting offerings that are highly differentiated from the iPad with options well beyond ATT for carriers. These device maker partners will be making more announcements coming this fall.

And so, a screen that I think would be perfect for the Archos 70 Internet Tablet, the Samsung Galaxy Tab and the Foxconn ARM11 Powered 7" Tablet reference design, Pixel Qi is announcing the development of the 7" Pixel Qi screen size. Here's also who needs to absolutely use the 7" Pixel Qi screen, the $35 Indian HRD Tablet Project!!!

We are developing a 7” screen for tablets and ereaders that is planned for mass production in H1 2011. Samples will be available earlier, perhaps by late Q4 2010.

In my opinion, everyone in the industry with 7" and 10.1" LCD tablet projects, all need to be a part of this revolution and need to use this amazing screen. Hopefully with mass manufacturing and large serious orders, the screen will be cheap enough to be close to the price of a normal LCD, hopefully the yield and the long term performance in use will be just as good as normal LCD.