Check out my exclusive video of the Archos 7 Home Tablet that will be released in April/May for $179 in the USA and 149€ in Europe:

It is powered by a 600mhz Rockchip 2808 processor, does web browsing pretty well (for an ARM9 processor) and plays all video codecs at up to 720p video playback (at up to limited 2500kbit/s bitrates for 720p).

For now, this Archos 7 Home Tablet is being released this next month or by May already and at this amazingly low $179 price for the 2GB version with MicroSD card slot. There will also be a 8GB version and maybe larger capacities for slightly more expensive. It also has a mini-jack to composite video-output using the headphones jack and micro-USB to USB host features built-in. The built-in stereo speakers are very decent for movie watching and the 7" 800x480 resistive touch-screen is just very fine and does allow for fast text input.

Archos is still working on the Android software optimizations, it comes with special video player, audio player and file explorer applications by default. My guess is that the Google Marketplace could be hacked to work onto it by the open development community at http://forum.archosfans.com

Also, my expectation is that Google will release an Android 2.2 or so version which will provide the full Google Marketplace experience on all large screen Android Tablets and even on Android Laptop form factors and also to provide such for lower cost platforms than the latest ARM Cortex based ones. See my interview with Andy Rubin and Eric Schmidt about those speculations: http://armdevices.net/2010/02/22/i-interviewed-eric-schmidt-and-andy-rubin-at-mwc-off-camera-for-now-watch-eric-schmidts-keynote-video/

Here are some pictures of this device (click to see full sized version on Picasa):

You can discuss this video at http://forum.archosfans.com/viewtopic.php?f=59&t=31278 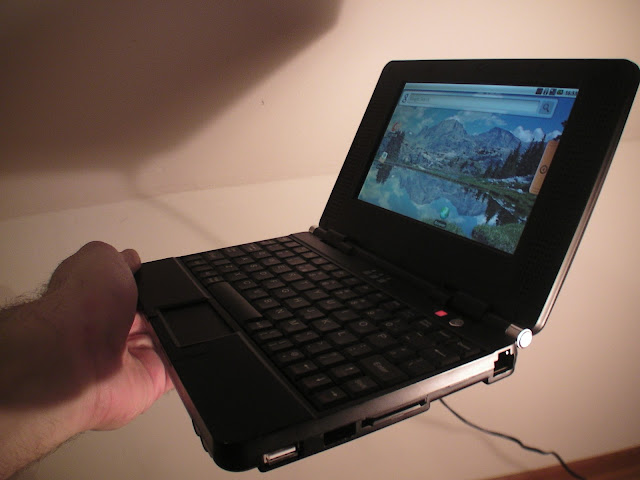 Yi Fang M5 is a 4.8" Android tablet based on a ARM9 Rockchip processor. Comes with webcam, MicroSD, announced price for distributors is $128: