Numbers for Q3 smart phone sales in the US market are currently being released by market analysis companies such as NPD and Canalys. The main graph to look at is following: 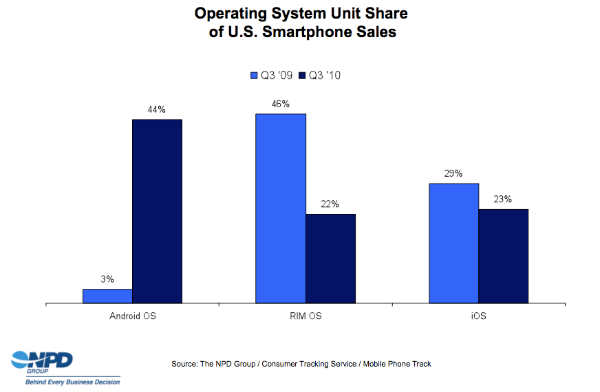 This confirms my predictions that Android smart phones are selling more than double as many smart phones per day than Apple iPhone in Q3 (considering even that the iPhone4 was released during this quarter) and possibly the rate will be closer to 4x as many by Christmas time.

Things will further accelerate in Android's favor once cheaper Android phones are commonly available to all consumers. Once people can easily buy a $199 Android phone out of contract, on a pre-paid plan offered by major US carriers as well as pre-paid specialist carriers such as Virgin Mobile and MetroPCS.